SEARCH
A minimum of 3 characters are required to be typed in the search bar in order to perform a search.
Announcements
Report
How does your salary stack up? 2022 IT Salary Survey Results Revealed
Event
Learn about the latest technologies that are revolutionizing identity governance and access management
PreviousNext
IT Life
2 min read
article

The Picture Of Health

St. Anthony's, a private hospital that has served St. Louis since 1900 and now has 794 beds, is replacing its system of storing medical images on film and hand-delivering them to physicians. The new system will provide physicians with access to 250,000 radiology and ultrasound diagnostic images from the nearest computer. 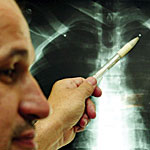 "We started looking at HIPAA regulations for hospitals of the future, and the security part says you need to have redundancy," says Greg Pinz, St. Anthony's director of information systems. To accommodate the radiology de- partment's need to more quickly access large diagnostic image files such as X-rays, mammographies, and CT scans, Pinz is replacing a 3-terabyte IBM enterprise storage server with two 10-terabyte IBM storage servers configured as part of a storage area network. When fully deployed in late June, the SAN will be connected to an IBM 3494 enterprise tape library for backup and recovery, 15 IBM pSeries Unix servers, and 12 Sun Solaris servers. St. Anthony's will use IBM Tivoli Storage Manager to administer the configuration.

The storage and server upgrades are part of a 2-1/2 year, $13 million project to overhaul St. Anthony's radiology department. The project includes new medical equipment in addition to the storage devices, servers, and imaging software. The hospital needs to deploy both IBM and Sun Unix servers because McKesson's software is written to run on IBM AIX while GE's software runs on Sun Solaris. In addition to photo archiving and retrieval, the IBM SAN will support pharmacy and transcription data, as well as E-mail, document management, financials, and other back-office functions.