The BrainYard - Where collaborative minds congregate.
Venkatesh Rao
Contributor
February 27, 2009
I had a big insight today: the word "social" in the term "social media" represents the ultimate in misleading advertising, and is responsible for many failures and a lot of disenchantment, especially within the enterprise. The adjective attracts exactly the sort of people most likely to fail at doing anything valuable with the technology. The sort of extroverted, harmony-seeking, consensus-driven collectivists who think it is all about the group, cutting big-ego prima donnas down to size, and building Brave New Egalitarian Communities that enshrine social justice values. It also explains why thoroughly introverted, unsociable, egoistic and ornery individualists (I am one; among my nicknames in college was "hermit") take to the medium like ducks to water. This conflation of social with sociable, collectivist and communitarian is extraordinarily tempting. Yes, the medium fosters communication and collaboration, but remember, wolf packs communicate and collaborate rather better than sheep. And they compete viciously for the carcass right after. The true nature of social media, the "message" of this medium, is one of radical, uncompromising individualism, within a brutally competitive, bubblegum-flavored Darwinian virtual environment. The "social" adjective is about something else entirely, not collectivist utopia. Allow me to elaborate. The implications are extraordinarily counter-intuitive, and if you don't learn to appreciate them, you will be eaten by the wolves.The Social Media Values TestFirst, judge for yourself. Here is a two-column list, with individualist and collectivist values. Both lists are derived from William Whyte's classic The Organization Man, with the "collectivist" values representing what he called the Organization Man's "Social Ethic" and the "individualist" values being essentially those of the "Protestant Ethic" of the earlier Robber Baron era in America. Which set of values do you think better describes successful uses of social media that you've encountered? 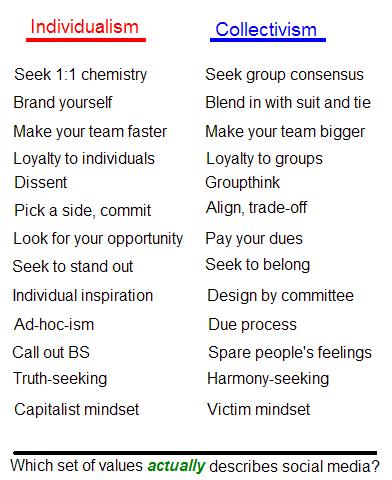 You can extend the list considerably, and there are subtle cases where social media appears to be collectivist at first glance, but is really individualist when you look deeper. Consider creativity and innovation: the "Wisdom of the Crowds" only seems like a collectivism-vs.-genius model. The real insight is that the wisdom of the crowds depends on individualism and "private" knowledge. WoC mechanism designers strive to get people thinking independently during ideation. It is only in later phases of pooling, building-off-each-other and filtration that communication is encouraged. And it isn't to compromise and create consensus, it is to do decidedly non-egalitarian things like ranking or "stock picking" in prediction markets. Early sharing, consultation and convergent debate actually makes the outcomes worse by fostering group-think and convergence to mediocre compromises. Collectivism, unlike WoC, encourages exactly these pathologies. Whyte describes this brilliantly (the guy got social media in 1953 better than many do in 2009!):

In group doctrine the strong personality is viewed with overwhelming suspicion. The cooperative are those who take a stance directly over keel; the man with ideas-in translation, prejudices-leans to one side or, worse yet, heads for the rudder. P1ainly, he is a threat. Skim through current group handbooks, conference leaders tool kits, and the like and you find what sounds very much like a call to arms by the mediocre against their enemies...The most misguided attempt at false collectivization is the current attempt to see the group as a creative vehicle. Can it be? People very rarely think in groups; they talk together, they exchange information, they adjudicate, they make compromises. But they do not think; they do not create...[The] fixture of organization life [,] the meeting self-consciously dedicated to creating ideas...is a fraud. Much of such high-pressure creation-cooking with gas, creating out loud, spitballing, and so forth-is all very provocative, but if it is stimulating, it is stimulating much like alcohol. After the glow of such a session has worn off, the residue of ideas usually turns out to be a refreshed common denominator everybody is relieved to agree upon-and if there is a new idea, you usually find that it came from a capital of ideas already thought out-by an individual-and perhaps held in escrow until moment for its introduction. Somehow, individual initiative must enter into the group...[We] must remember that if every member simply wants do what the group wants to do, then the group is not going to do anything. -- William Whyte, The Organization Man, 1953.

I will not belabor the point, but even apparent collectivist successes like Obama's social-media fueled victory lend themselves to individualist-ethics analysis.So What's So "Social" About Social Media?Here's why people fall into this confusion. The media are "social" not because they enable sociability, harmony and World Peace, but because people are the medium. You don't connect to people through the medium. The people are the medium to connect you to value. The technology itself is just the material that allows humans to act like a connective medium. Here's an analogy: specific social technologies like wikis and blogs are like metals, it is humans' virtual activity that forms the metal into communication "pipes" that make the whole thing "media." Twitter and email illustrate this best. I don't realy get links to interesting articles through "email" or "twitter," I get them through "people." I don't connect to people (in the sense of "making friends/contacts") through the LinkedIn platform: I connect to people I don't know through people I know, who are also on the platform. Remember McLuhan's big idea, that the "Medium is the Message?" Here's how the algebra works out:

The medium is social because it is made of people, and its "message" is the true nature of people. Love it or hate it, we are products of evolution: we brilliantly co-operate like pack dogs to bring down the bison, and then fight like crazy over the carcass. We groom each other as primates, but owe our brain development in large part to the evolution of social manipulation and exploitation skills. These are the human traits social media amplify.This means all successful social media efforts are fueled by self-interest, not altruism. If it looks like altruism, look again. If it looks "free," look for the hidden economy.Implications: Six Easy PiecesI could go on, but a word to the wise is sufficient. This "social media is not really social in that sense" idea takes getting used to. I myself was long puzzled by how unreasonably natural an apparently "social" medium felt to me, a certified and implacable anti-collectivist. The powers-that-be at my workplace once saw fit to send me to a leadership course, where of course, I scored "ornery, stubborn, recluse" on all those tests for sociability and introversion. I avoid parties and committee work like the plague, and I never yet met a consensus that I don't itch to disrupt just for the hell of it. And I am not alone -- most social media mavens I've met seem to be like me. I usually find them by butting heads with them somewhere, and then making up.The lesson is unequivocal: radical individualists of the world rejoice. Despite all appearances, this is YOUR world.Venkatesh G. Rao writes a blog on business and innovation at www.ribbonfarm.com, and is a Web technology researcher at Xerox. The views expressed in this blog are his personal ones and do not represent the views of his employer.
Catch up on the week's most important stories, case studies, and features affecting your IT career. Delivered each Friday.
Subscribe
Editor's Choice
Streamlining Data Storage at the 49ers’ Homefield
Joao-Pierre S. Ruth, Senior Writer
Seaports, Backlogged Supply Chain Seek a Digital Response
Joao-Pierre S. Ruth, Senior Writer
How Enterprise Tech Has Evolved Twenty Years After 9/11
Joao-Pierre S. Ruth, Senior Writer
Webinars
More Webinars
White Papers
More White Papers
Live Events
More Live Events