50%
Tweet
You never forget your first PC -- especially when it weighs 29 pounds and boasts a jaw-dropping 64 KB of RAM.

Were you born Before Computers Everywhere (BCE)? If so, you know it's nearly impossible to convey to young people today how we lived in this pre-PC, pre-online, pre-cellular data world. They can't quite grasp it, this primitive, joyless, grey world. Besides, they're usually staring at their smartphones and not listening to you anyway.

But I need to tell you about it, children! (To help you listen, I've taken the liberty of shutting off the WiFi and hiding every tablet, laptop, desktop, smartphone, smartwatch, Raspberry Pi, and Internet-connected appliance in the house. Now I'll pause until you stop crying.)

[Driverless cars are just the beginning. Prepare for the era of the smart machine. Read 10 Robots Changing The World.]

Even otherwise smart businesses were irrationally slow to embrace desktop computing. All of my jobs between 1980 and 1983 had me working on IBM Selectric typewriters, the gold standard for office technology at the time. In fact, it wasn't until 1984, when I joined a startup trade magazine, that I got my hands on a PC.

Okay, so it wasn't my PC. It was delivered one day for my boss, the publisher, who promptly placed it on the expansive desk in his corner office. We'd received it as a review unit shortly after the machine's official introduction in August.

One afternoon, as my boss was away doing what trade magazine publishers do (i.e., making more money than all the writers, editors, and designers combined), a colleague and I snuck into his office.

It's true, what they say: You never forget your first.

As the late afternoon sun danced through the office blinds and the air conditioning hummed from somewhere deep within the walls of the office building, we booted up that IBM Personal Computer/AT.

Fantastically, the AT sported a 20-MB hard drive. "Do you realize how many floppies that is?" my workmate asked in a hushed tone. "A whole lot," I replied, showing off my intuitive gift for numbers.

The original AT ran at 6 MHz; it was superseded by an 8-MHz model sporting a 30-MB hard drive. But by then, I'd moved on to my true love. I was using a computer that taught me everything I would need to know about where the world was headed in terms of connectivity and mobility. I was using a Kaypro II. 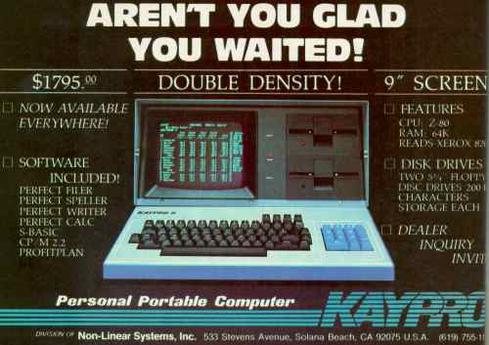 The Kaypro II, released in 1982, featured two 5¼-inch double-density floppy-disk drives, 64 KB of RAM, and ran Digital Research's CP/M operating system. Weighing in at 29 pounds, it and other PCs like it were dubbed transportables or, more cheekily, luggables.

But I didn't care. Hauling this PC, which was roughly the size of a sewing machine, through airports, I'd look disdainfully upon the other travelers, who didn't have a computer -- much less a mobile computer like mine!

At my destination, all I needed was my acoustic coupler, CompuServe account, and (sometimes) a screwdriver to send stories electronically to my editor back in New York.

Arthur C. Clarke, a childhood hero of mine who wrote novels and screenplays on a Kaypro II from his home in Sri Lanka, and I were already living in the year 2001. I loved that Kaypro, all the way down to its 9-inch green monochrome CRT.

What was your favorite Kaypro II memory? Do you have another favorite PC from the 1980s? Share your story in the comments below.

My first computer was a big ol' IBM desktop, and I remember mostly just being frustrated because I couldn't afford home Internet access, so it seemed so limited. I have no recollection what I did with that machine, only that I gave it up when I moved and went back to school, which required a laptop that cost a holy fortune at the time.
Reply  |  Post Message  |  Messages List  |  Start a Board

Tonight over dinner, I told my younger son (he's 25) about this column. He immediately asked, "What do you think comes next, Dad?"

"Hardware or software?" I replied.

"Hardware," he said, quick as can be.

"More intimacy, concievably including direct connections into our heads," I said. A fraction of a second later,  I added, "Honestly, I have no idea. Who wants more cake?"

I got started on donated public computers at the library. 4 PC XT's, with WordPerfect and time severly rationed, and a KayPro II, with WordStar that nobody else could figure out how to use. CP/M book in the Library. Learned a lot trying to figure out why no Ctrl-;. Probably not the first standardized design mistake in the industry, but still one of the worst. Probably what killed WordStar more than anything else, considering that most people are right-handed.

Nice Posting. You did not mention the KayComp 1

One day on 1982, I was at Non-Linear Systems as I worked for EE Times. That day, i was showed the original KayComp built personally by Andy Kay, who almost no-one knows invested the digital volt meter. No Terktonics or HP. If if was not for Andy's quirks NLS would be bigger than HP today. I have a very low serial number that I will not devulge along with many tales about how Bob Smith the first VP of sales built the distribution channel. If a dealer  ordered two KayPro's, he sent 5. If you did not want to accept delivery he would send them to another dealer. Then  he would send all sales leads to the store that refused delivery. That store then ordered 10 or more. At any rate it is my museum and still works fine. KayPro coud have been a major player, but way to much abuse and monkey-business on that beautiful Delmar campus.
Reply  |  Post Message  |  Messages List  |  Start a Board

Mine was an Osborne one, I actually was running a version of CP/M called zcpr3, it occupied 5 k of my 64K Productivity software and Zork for fun and an Anderson Jacobson acoustic coupled modem.
Reply  |  Post Message  |  Messages List  |  Start a Board

My dad got a Kaypro to use for his small business.  We kids spent many hours playing the simple text graphics games that were included.  I think we almost wore out the space bar.

At twenty-nine pounds and a whopping 64k of RAM what's not to like about the Kaypro II??  Yikes.  I do not long for the days of technology yore.  Good riddance.  About the only thing these machines are good for now is (1) a doorstop or (2) a rather large paper weight.  Everything else is just misty, watercolored memories filling up landfills worldwide with electronic garbage.
Reply  |  Post Message  |  Messages List  |  Start a Board

Wow! You must have learned patience while working on that thing. My early experiences with computers were less thrilling than the one you describe in your post. I worked on an Apple IIe. I was a kid and it was facinating. I dreamed of owning a computer so I could use it whenever I wanted...
Reply  |  Post Message  |  Messages List  |  Start a Board

I got a kit for a Ferguson Big Board. 64 K, Z80, CP/M operating syste. I believe the board was a direct ancestor of the KayPro. I built mine with a pair of 8 inch single sided floppies, keyboard, monochrome monitor (mine was amber), and remember rewriting a serial port driver for my printer. It's still in the barn at the old homestead on the other coast, but I still have fond memories of it. I even has a COBOL compiler for it.
Reply  |  Post Message  |  Messages List  |  Start a Board

I used to sell these Kaypro's. lol   I remember the company had a big circus tent in N. San Diego county to store finished computers and parts. We used to drive the van over there to pick up 20 of them at a time.    The bundled software Perfect writer, Perfect Calc, etc... Ahh, the good ol'days.

Never needed to buy a Kaypro since I always had one when ever I wanted to mess with one.  I think the Compaq luggable and lack of software put the nail in the coffin for Kaypro, if I remember right.

My first computer that I actually got to own was a dual Tandon floppy drives, 16k IBM PC with an amber screen.  We used to sell the dram to upgrade them to 64k for 5 bucks each, then the AST 6pack became the big thing since the IBM didn't come with a clock chip and wasn't upgradable past 64k.

Amazing how much these used to cost in relation to today.