9 comments
Comment Now
Businesses learn lessons the hard way when their social media posts go wrong. Have a look at the businesses that made this year's naughty list. 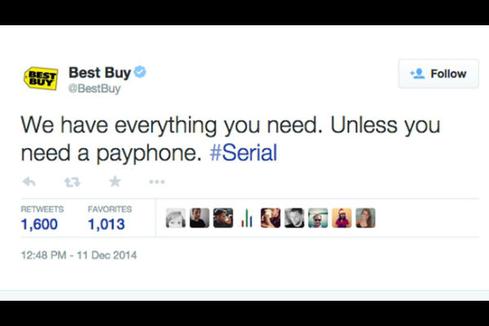 3. Best Buy's murder joke
Best Buy apologized after tweeting a joke earlier this month related to the popular podcast "Serial," which investigates the real-life murder of a teenager in 1999. The tweet, which the company has since deleted, read, "We have everything you need. Unless you need a payphone. #Serial."

The tweet alludes to a key element of the case against the murder suspect -- a payphone in the parking lot of a Best Buy that the suspect allegedly used to call for a ride following the murder. "Serial" tries to answer the question of whether or not the payphone existed.

The tweet immediately sparked outrage on Twitter, and a few hours later the company apologized: "We deeply apologize for our earlier tweet about Serial. It lacked good judgment and doesn't reflect the values of our company. We are sorry."