Ten years ago Microsoft's reputation for security was, to put it mildly, bad. As RSA keynote shows, my, how things have changed.
Larry Seltzer
Contributor
February 29, 2012

Ten years ago things looked bleak for Microsoft. It was in the aftermath of an antitrust clubbing and faced other legal actions across the globe. As bad as things were, its products still remained dominant in the market.

One big problem Microsoft had, which they decided to 'fess up about and address squarely, was security.

Bill Gates wrote one of his strategic memos to the company outlining a vision. In 10 years, Gates said, computing would be involved in just about everything we do. Microsoft had been delinquent in assuring the security of its products and this had to change, including the embracing of security throughout the development cycle. January 12 was the 10th anniversary of this memo.

In his keynote at the RSA 2012 Conference in San Francisco, Scott Charney, Microsoft's corporate VP of trustworthy computing, described just how prescient Gates was. It's not the first time the man had a clearer vision than most, although it would have been better for everyone, Microsoft included, if he had come to this realization earlier. 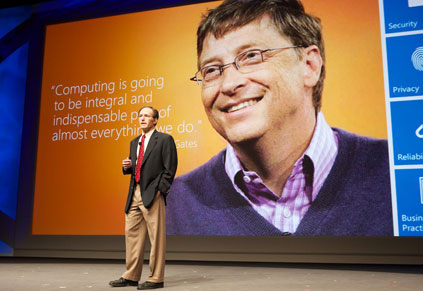 Microsoft met Gates' challenge. It would have seemed preposterous to suggest this a decade ago, but Microsoft is now a top-tier industry leader in security. Throughout its product line, it makes tough decisions for security that it would have explicitly avoided in the past, mostly in the form of disabling features by default and forcing users to make security decisions.

As Gates demanded, Microsoft created a software development discipline called the Security Development Lifecycle, which sets rules and guidelines to make code more secure. There is a clear difference in products which were built under the SDL compared to those built before it.

Microsoft hasn't done everything right in the last 10 years, but this is one area where they have excelled.

I think it's fair to say that, in the same 10-year period during which Microsoft changed from security laughingstock to security leader, its dominance in the industry also took a slow, steady decline. There were many reasons for this; I don't count security among them.

In fact, customers have been slow to adopt newer, more secure versions of Microsoft products. In many cases they cling to Windows XP (which I personally find inexplicable). It just goes to show that security is important, but it's not a real market driver.