A study from Pew Research shows nearly two thirds of us get our news from Twitter and Facebook. That's not good if you like to learn, or even if you want to keep your children alive.

Most of you are probably not shocked by this. But you should be shocked at how quickly this number grew in the past two years. According to a survey of 2,000 American adults conducted in March by Pew Research in collaboration with the James L. Knight Foundation, 63% of respondents said Facebook serves as a source for news, and an equal number said the same about Twitter. This is a dramatic jump from a 2013 Pew/Knight study, which polled more than 5,000 Americans, 3,268 of whom were Facebook users. In that study, only 47% of the Facebook users polled said they thought of the social media service as a source of news. Only 52% of respondents in the 2013 study said they thought of Twitter as a news source.

The next thing you'll tell me is that no one reads a newspaper anymore! What? Oh. Well, never mind.

I'm usually the one advocating for the next best thing and trumpeting progress. So why do I have a problem with this?

Because what we've instinctively known about the echo chamber effect of social media is true. If you get your news exclusively from the sources you choose to follow via social media, you only get one side. And if you get your news in 140 characters plus links, chances are you're handpicking your news sources carefully. A 2014 study examined the Twitter habits of people who voted in the 2012 US election and had followed the Twitter profile of at least one of the candidates running for that election. The researchers found that 90% of the Tweets read by voters who were followers of one or more candidates matched their political ideology, whether conservative or liberal. 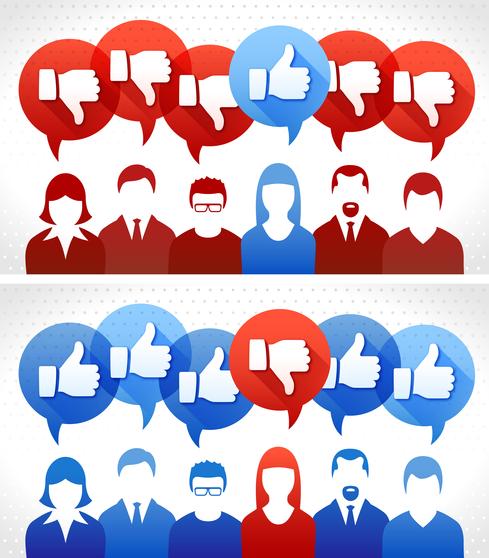 So we follow mostly people who agree with us and, when they don't, most of us (unless we're trolls) probably ignore the fact to keep the peace among friends and loved ones online. Not a great way to live life if you want to learn something. Even if you are "right" about a given topic, having empathy for the other side is important, and difficult if you never know what the other side is.

Beyond the echo chamber, there is a scarier factor at play here, one that can actually kill you. Online medical information, like the kind that gets passed through social media, has been found to be highly inaccurate. For example, a study of Google search results for safe infant sleep positions, conducted in 2012, found that only 43.8% of the 1,300 websites examined offered advice on infant sleep positions that was in line with recommendations from the American Academy of Pediatrics. Even worse, the study found that information from a search for "infant home monitors" yielded only an 18% accuracy rate.

Don't even get me started on the times Twitter "broke" stories on national news that turned out to be entirely untrue, like when the White House was supposedly attacked shortly after the Boston Marathon bombings.

There is an easy way to solve the problem. Studies have shown that taking the step to source your own news -- whether via radio, TV, or online -- means you are likely to get a centrist viewpoint. It is when we step into Twitter or Facebook that we enter the echo chamber. So, try avoiding the convenience of social media and get your news straight from the source. It'll be worth it, if only to see how the "other half" lives.

David has been writing on business and technology for over 10 years and was most recently Managing Editor at Enterpriseefficiency.com. Before that he was an Assistant Editor at MIT Sloan Management Review, where he covered a wide range of business topics including IT, ... View Full Bio
We welcome your comments on this topic on our social media channels, or [contact us directly] with questions about the site.
Comment  |
Email This  |
Print  |
RSS
More Insights
Webcasts
Monitoring the Invisible - Digital Experiences in a Zero Trust World
Fact or Fiction? The Truth About Cloud Native Security
More Webcasts
White Papers
4 Steps to Achieving Comprehensive Kubernetes Security
Gorilla Guide Extended Detection and Response
More White Papers
Reports
Intel 471 Breach Report
Why You're Wrong About Operationalizing AI
More Reports
Copyright © 2021 UBM Electronics, A UBM company, All rights reserved. Privacy Policy | Terms of Service