Its chips may not run as fast as Intel's Core Duo or AMD's Athlon, but mobile and green computing could give its chips a new edge.
Michael Singer
Contributor
March 23, 2007
Half of VIA's $660.56 million in annual revenue last year was in developed markets, and about half of its industrial contracts are for non-PC embedded systems. Its x86 chip sales are primarily to generic or white-box PC makers, and the majority of its PC-related business comes from its chipsets--VIA is a component supplier to AMD.

Some of VIA's success in the embedded market is attributed to its PadLock Security Engine, which provides encryption built into a chip, says Linley Group analyst Linley Gwennap. VIA integrates more functions in its chips than Intel, Gwennap says, and is getting noticed particularly for the embedded encryption.

VIA also is positioning itself as a player in the convergence between low-power embedded and client systems. "We think we're in a very good position to take advantage of both markets because there is such a shift away from traditional PC models and toward thin clients as well as ultramobile devices," says product marketing manager Johnny Wang. 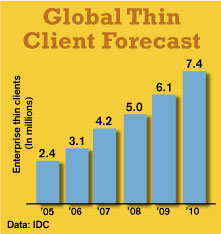 Case in point is Samsung's Q1 portable PC, which comes with either a 900-MHz Intel Celeron-M or a 1.5-GHz VIA C7 mobile processor. Despite its lack of a keyboard, the device is popular with certain demographics, Wang says, because it can include Bluetooth technology to connect a keyboard, GPS, and eventually CDMA or GSM cellular technologies to convert the nearly 2-pound device into a phone.

VIA also has shrunk its motherboards from the Mini-ITX 21.5-by-19.1-centimeter and Nano-ITX 12-by-12-centimeter designs to a 10-by-7.2-centimeter Pico-ITX configuration, Wang says. The goal is to give ultramobile device makers a standard way to add a battery and a 2.5-inch hard drive to create an alternative to bulkier tablets and laptops.

VIA is targeting blade server systems for future growth, but Gwennap is skeptical. "It took AMD between five and 10 years to break into the server market before Opteron came out, and some people still refuse to put AMD in their data center. With VIA, it might take longer."

With the high-efficiency ratings of its processors, VIA is hoping to play the current green computing movement to its advantage. It planted 100 broad-leaved trees in County Durham, England, with the goal of putting in enough trees to offset carbon emissions from producing its processors, chipsets, and other devices. VIA also provides a solar-powered kiosk center with up to 12 PCs when a customer buys a minimum of 2,000 VIA CPUs.

Most companies still aren't buying based purely on eco-friendly motives, but energy efficiency is becoming a high priority. That could bode well for VIA's future as the underdog in the x86 market.