When robots fight, they don't last long. That's okay, because they're educating and entertaining us as they tear each other apart. 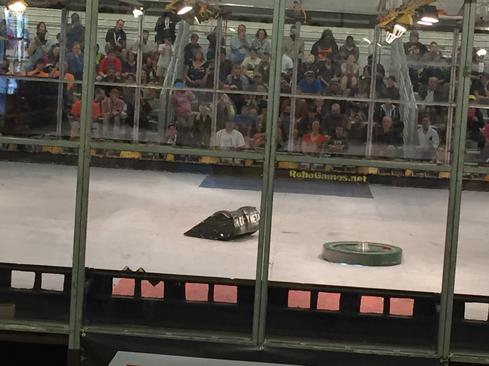 Visiting the 11th annual RoboGames in San Mateo, Calif., on Friday, I was reminded how far we are from true artificial intelligence.

The exhibition hall was filled with robots that had very little in the way of brains. And that's probably for the best, since the humans attending the show were there to watch robots fight and die. Intelligent robots might have refused to serve as mechanical gladiators, negotiated for better pay, or rebelled against their frail yet demanding masters.

Most of the machines at the RoboGames were not robots. A robot is "a machine capable of carrying out a complex series of actions automatically, especially one programmable by a computer," according to Google. Automatic operation is also central to Dictionary.com's definition of the term.

Wikipedia offers a broader definition: "A robot is a mechanical or virtual artificial agent, usually an electro-mechanical machine that is guided by a computer program or electronic circuitry." Within these parameters, software programs and cars qualify as robots.

A robot should be autonomous, and most of the robots at the RoboGames were not capable of acting on their own. Most of the bots at the games required a human operator with a remote control device. These machines would be more accurately described as dangerous remote control vehicles because of their cutting blades and flame throwers. Those few I saw that had some degree of autonomy still had to be brought in, set up, calibrated, charged, and managed.

Though the competition is billed as the RoboGames, it's really the Competitive Engineering Games. This is human combat by proxy, rather than a battle between robots directed by algorithms. It's as much a measure of the skill of the person handling the remote control as anything else.

That's not to dismiss the creativity and strategic thinking behind these machines, or how well they work as entertainment. It's great fun to watch people compete through their remote controlled creations and to see how engineering decisions shape the outcome of the conflict.

For example, wedge-shaped combatants are common because they can get underneath opponents and flip them while making it difficult for opponents to do the same. But spinning machines can generate huge amounts of force, allowing them to damage opponents severely if they can hit an exposed surface at a suitable angle.

A spinning disk-shaped robot named The Blender demonstrated the advantages of its design by striking a wedged-shaped bot on the side and sending it flying, disabling it in the process. Another variant on this design involved a spinning wedge with a hammer affixed to it. You really would not want to get hit in the ankle by this thing.

I would love to see robots fight each other without human intervention, provided their tactical choices and limitations were apparent. However, sophisticated, adaptable autonomous action is extraordinarily difficult to program. Robots capable of assessing their opponents and devising an appropriate strategy are likely to be too complicated and expensive for hobbyists and weekend warriors. Even the military prefers human-directed machines.

Those who had the pleasure of playing Muse Software's RobotWar in the early 1980s, or any of the variants on this concept, may share my affinity for contests of code. But competition between software programs tends to be too inscrutable to be interesting to most observers. Hence the RoboGames are contests between people, with fire and violence to hold our attention. Engineering, it turns out, can create interesting entertainment.

Machines can do some remarkable things, thanks to advances in artificial intelligence and machine learning. But these feats remain limited to specific tasks or domains. Robots aren't up to complicated moral choices and sorting through ambiguities. They don't have the benefit of a lifetime of experience and interaction to guide them. How do you encode whether or not an armed sentry robot should fire on a target that may or may not be a child who may or may not have a gun that may or may not be plastic? How do you program an autonomous car to steer when all the available paths end in a collision with a person? And how do you justify that code under cross-examination? These are hard choices, and no one wants to be held responsible for making them. This may help explain why we've kept people in the decision-making loop.

Tech luminaries such as Bill Gates and Elon Musk may believe there's reason to worry about AI run amok, but AI is difficult. It's nowhere near being able to operate machines without human intervention for anything other than specific tasks. And after seeing the carnage at the RoboGames, I'd be more concerned about machines directed by people.

In the pages that follow, you'll see the reasons for my concern, as well as how robot fights are becoming a spectator sport.

@Some Guy: I would also prefer to watch a competition among the thinking robots because this fight is getting us nowhere. We are stuck in similar designs either by the rules of the competition or by technology but either way the show has become stale because as far as technology is concerned, in the ring there is not much difference in the first annual and eleventh annual games but there is a huge change in the technology outside.
Reply  |  Post Message  |  Messages List  |  Start a Board

High on drama, low on tech, I find these kinds of competitions really ... uninteresting ... bordering on the pathetic. When they get around to autonomous robots, that will change. Personally, I'd rather watch autonomous mini-sumo robots outthinking and out-competing each other (although I'd be the first to admit that you have to have put autonomous robots together to have a real appreciation for what is being accomplished).

Pretty much the same reaction I have to Demolition Derbies vs. Grand Prix racing. They both involve cars; but only one captures the imagination for finesse and skill.
Reply  |  Post Message  |  Messages List  |  Start a Board

Yes, Dave, it was Reel Steel and it was a fun movie with Hugh Jackman. When he programmed the robot to imitate his moves and then went outside with the robot and started to create movements for the robot's memory--that was cool. And that's coming from a woman who doesn't really get into the robots and their technology. I mean if you've seen one robot you've seen 'em all! lol ; )
Reply  |  Post Message  |  Messages List  |  Start a Board

That's one argument for viewing these matches via video. You have to watch robots confined in a plexiglass arena, and plexiglass is optically noticeable -- everything inside looks like it's been processed with a Photoshop filter. On video, the match is much easier to see because camera lenses get to shoot from inside, while the camera operators remain safely outside.
Reply  |  Post Message  |  Messages List  |  Start a Board

I attended a robot competition at San Francisco State a few years ago. I'm not sure how it would have done against the flame thrower, but someone had put a projecting, spinning rotary saw blade on a moving platform and it did a lot of damage when it ran into something. It didn't necessarily saw through everything. But components sure flew off its opponents. Was glad for the bullet proof plexiglass between me and them as nuts and bolts flew violently into the cage walls.
Reply  |  Post Message  |  Messages List  |  Start a Board

I definitely think that if something like this could get off the ground, we would see sponsorship at the  competitor level.  The nice thing is that thanks to all the moving parts, there is lots of opportunity for involvement from multiple tech industries.
Reply  |  Post Message  |  Messages List  |  Start a Board

Twitch is a different deal. One in every 55 Twitch viewers is a Twitch broadcaster. It is literally a source of one million content creators.

If you want a professional league with tens of millions in budgets from enterprises you can't rely on crowd-sourced content. Take NASCAR as an example. A feature sponsorship on NASCAR is a $35 million deal. Most NASCAR teams need dozens of sponsors. And they're running technology that has been around for a century.

If you want to learn from the research of something like this, it needs to be done on a big time, scale. And to do that, they eed ot think they get their money back eventually.

Twitch is fine for a medium which is already essentially video. All you are doing is catpuring the stuff and putting commentary over it. This is a whole different deal.
Reply  |  Post Message  |  Messages List  |  Start a Board

>No TV equals no league no matter what it is that you do.

Twitch seems to work fine without TV. With some funding and organization, these hobbyist events could turn into something more polished.
Reply  |  Post Message  |  Messages List  |  Start a Board

I don't know. there have been several robot combat TV shows that have tried and failed recently. One was based on the type of fighting in Reel Steel or whatever that Hugh Jackman movie about the ex-boxer turned robot jockey was. Most have found short term success at best.

No TV equals no league no matter what it is that you do.
Reply  |  Post Message  |  Messages List  |  Start a Board

>What we really need is a professional, corporate sponsored robot combat league so that companies with a vested interest can sponsor teams of researchers to improve the state of the art.