Encouraging children to pursue careers in technology is great, but until Silicon Valley deals with its culture problem, it won't matter.

Facebook's new diversity program called TechPrep shows yet again that Silicon Valley is unwilling to look at itself in the mirror and fix the real problem behind the lack of diversity in IT.

The program, like many others, is designed to "inspire" more participation of minority groups in computer science. What is different with Facebook's effort is that it is going after parents, too. According to research from McKinsey cited by Facebook, 77% of parents say they do not know how to help their child pursue computer science, so TechPrep's focus on parents makes sense. It also appears to be a different strategy than most of the countless other programs sponsored by tech companies.

However, the real problem isn't about inspiring minority children; the issue lies within the companies themselves. They don't hire enough minorities. When they do, those minorities, especially women, don't feel comfortable in the culture created by those companies.

However, only 2% of tech workers at seven Silicon Valley companies that released staffing numbers are African American, and only 3% are Hispanic, according to USA Today.

Even when you narrow the field to graduates of "prestigious research universities," a disparity still exists.

Last year, 4.5% of all new recipients of bachelor's degrees in computer science or computer engineering from top research universities were African American and 6.5% were Hispanic, according to a USA Today report that cited data from the Computing Research Association's annual Taulbee Survey, which included 179 US and Canadian universities.

It doesn't add up. More African Americans and Hispanics are inspired to take degrees in computer science than are working in the field.

The same types of problems exist for women. From 2000 to 2012 there was a 64% decline in the number of first-year undergraduate women interested in majoring in computer science, according to the National Center for Women and IT. But that's only half the problem. 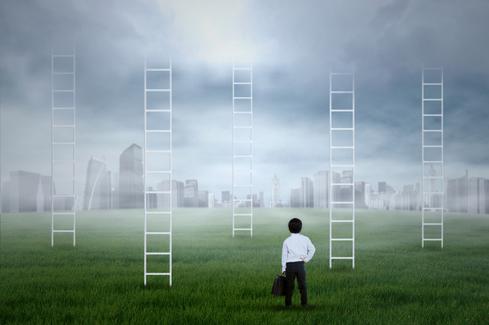 The other half of the problem is that the women that IT does attract tend to leave. Women are 45% more likely to leave IT than men, according to a 2014 study from the Center for Talent Innovation.

Also at odds with recruiting efforts are changing demographics of the tech industry hubs -- including the San Francisco Bay area. The tech boom and resulting spike in housing prices have forced many, including minorities, out of their homes and, in some cases, out of the area.

In the historically Hispanic neighborhood of San Francisco's Mission District, which has been popular among tech workers, the Latino population was 30,000 in 2000, but in 2013 that number fell to 21,893, according to a study by the Mission Economic Development Agency and the Council of Community Housing Organizations.

Tech companies "bring their people in, eat up the housing, and in the midst of all of that they just scatter African Americans," said Frederick Jordan, president of the San Francisco African American Chamber of Commerce, in an International Business Times report.

Whether that's a universal feeling is up for debate, but there is no denying that there is a decline in the minority population in San Francisco and other cities around Silicon Valley. Oakland, Calif., lost 25% of its African American population in only the last 10 years, according to census data.

The displacement is a symptom of a larger problem. If there were more opportunities to be hired and to thrive in those tech centers, things might be different. Of course, there are other economic factors at play in the shifting demographics of tech-heavy regions. But, clearly, Silicon Valley companies are not charging ahead in recruiting minority CS graduates, either.

[Can the trend be reversed? Read Women in IT: Is There an Exodus in Progress?]

While inspiring the next generation is great, tech's diversity problem will continue if recruits are not happy once they get through the door. In 1984, the portion of women earning CS degrees reached its peak at 37%, according to The Washington Post. However, over the next two decades women left the field in droves, and by 2006 the percentage of women in CS dropped to 20%, said the report.

Clearly, there needs to be an effort to build a culture of acceptance, opportunity, equality, and continued inspiration if the talent attracted is to stay.

Of course, changing the culture within tech companies is much harder than dropping millions of dollars on outreach programs to "inspire" minorities and women. I hope I'm wrong, but these types of programs do nothing to inspire the real change that needs to take place.

David has been writing on business and technology for over 10 years and was most recently Managing Editor at Enterpriseefficiency.com. Before that he was an Assistant Editor at MIT Sloan Management Review, where he covered a wide range of business topics including IT, ... View Full Bio
We welcome your comments on this topic on our social media channels, or [contact us directly] with questions about the site.
Comment  |
Email This  |
Print  |
RSS
More Insights
Webcasts
Fact or Fiction? The Truth About Cloud Native Security
Leveraging Infrastructure as Code to Streamline Security & Operations
More Webcasts
White Papers
Case Study: What Elite Threat Hunters See That Others Miss
Privileged Account Management for Dummies
More White Papers
Reports
SANS 2021 Cloud Security Survey
Why You're Wrong About Operationalizing AI
More Reports


yaaland while we would hope that was the case for every job sadly it is not. Bias can be overt or subconscious as all the research has shown for years. The bias presents itself not only in the hiring process but in the retention and promotion processes in organizations. Until we see more people that are truly agnostic toward differences this will not change and those in positions of power will hire those that most closely reflect themselves.

@driedsquid- Well, it is a problem from the point of view that clearly more people wanted in than stayed. So clearly IT is doing something to drive them away. That can't be good, right?

But also study after study has shown IT departments that are diverse perform better. So if you want to be a successful company you need to have lots of points of view.

That said, no one is asking for every job at every company to be perfectly aligned and representational to population numbers. The goal is to create a space where the numbers take care of themselves in the end. But it is clear that isn't happening right now, because people are getting into and then leaving the industry.
Reply  |  Post Message  |  Messages List  |  Start a Board

@moarsauce123- Well, it is the same reason why steel mills were all centered in the what is now the rust belt. Concentrations of resources mean that businesses concentrate. In this case, the talent levels of engineers from Stanford and Berkeley and elsewhere created industries that drew more talent. And they drew more talent etc.

The same can be said of tech centers around MIT and Harvard, or in Austin, research triangle, etc.
Reply  |  Post Message  |  Messages List  |  Start a Board

@Gary_El- Well, I don't know about the urban experience thing. But I know that what you are saying means that if you are squeezing groups out because housing is getting expensive you are not giving opportunities to the groups you are squeezing out to make the money the groups that are doing the squeezing can make.
Reply  |  Post Message  |  Messages List  |  Start a Board

@DJ Liu- Thank you for your comment. I certainly don't want to do what you think I've done. But I feel like between what I could include int he article and what I linked to I made the case that not only are there more degrees being granted but total employment among minorities is not growing. the argument I'm making isn't about hiring (though minority hiring isn't in line with degrees offered either). It is about people staying in the field.

So, just for argument's sake, let's say those 18% of degrees that went to hispanic and African American CS majors all were leading to jobs. We'd expect to see, eventually, that the number of hispanics and African Americans in IT would be growing. The same with women. However, that isn't true. It is basically flat.

The reason is not new hires specifically. It is that once new hires arrive they don't like what they see. So, while I'm certainly interested in new hire numbers, they aren't actually relevant to the argument I'm making here which is that for at least the last decade, we've been inspiring more minorities to get into IT than we've inspired to stay.
Reply  |  Post Message  |  Messages List  |  Start a Board

<But, of course, changing the culture within tech companies is much harder than dropping millions of dollars on outreach programs to "inspire" minorities and women. I hope I'm wrong, but these types of programs do nothing to inspire the real change that needs to take place.>

I'm inclined to agree wtih you on that.
Reply  |  Post Message  |  Messages List  |  Start a Board
InformationWeek Is Getting an Upgrade!