Why Silos Can Be Good For Enterprises - InformationWeek

Flat organizations can get too flat. Build your teams the right way for success.

Enterprises, especially startups, have made increasing efforts to break down silos, flatten organizational structures, and create "one culture." This, according to University of Pennsylvania professor Damon Centola, might be taking it a bit far. If you can think about them the right way, some silos (or at least teams) are actually good. Silos, groups, or teams -- or whatever you want to call the social networks inside your company -- work better if they overlap, but aren't just one big disorganized soup.

Centola's paper,"The Social Origins of Networks and Diffusion," studied how social networks form and how complex information travels across networks. It builds on studies going back to the 1970s by Peter Blau and Joseph Schwartz. Blau and Schwartz proposed the very influential theory that if society was too structured it created barriers to ideas spreading. Essentially, social barriers like class or race could prevent ideas from easily diffusing. Centola's study adds that that reverse can also be true. If a social network is too loosely organized, complex ideas don't spread either. Essentially, we become a collection of individuals and we don't reinforce good ideas.

To get a "network effect," the network has to be defined enough by commonalities for the ideas to be accepted and put into practice. What this means for enterprises is that unless you are quite small, you are better off maintaining some of your group structure.

This is true if you want to spread a new idea, an innovative culture, or even a new best practice. In an interview with InformationWeek, Centola said, "In order for a group to change their behavior, they need cultural norms. If the norms are changing, what is going to inspire you to buy into that change? People need lots of social reinforcement to buy into these changes." That's why you need a group or a team to reinforce the behavior. But how does it move outside of the "silo" or team into the organization as a whole?

[Learn more about the importance of shared goals. Read Is Your IT Team Working In a Vacuum? ]

That's where team design is crucial. "The key," Centola says, "is to have several members of a group be a bridge to another group. When you design groups, design a few people that overlap." What you want is a few people from each team in communication with another team, and a few different people on the team to be connected to another team, and so on and so on. This way, you create networks of teams that are bridged together. These ties from one team to another allow an idea to move and diffuse across a network much faster than it would if it was one big team.

When you do this, you have to think about the size of your bridge. The study shows that one person is often not enough to build an effective bridge between groups. You need a few people to reinforce the social behavior. Obviously there is no hard and fast rule on the number of people, and it is greatly dependent on team and enterprise size. But when asked for a rule of thumb or a way to think about it, Centola said, "Rule of thumb is a good way to put it. There is a window of maybe a third of the group overlapping. That ends up being very effective. More than that would be a problem. That would be too many dual memberships. But a third gives enough influence." 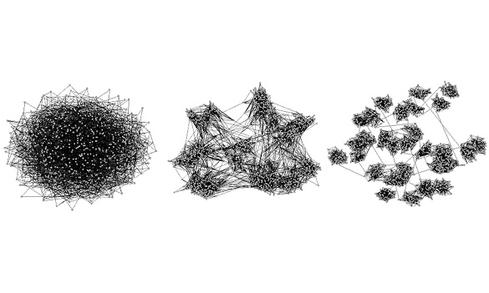 As an example, imagine that a new environmental initiative starts inside a single team. The group reinforces the behavior inside its own group through a combination of social influence. To spread it from one team to the next, you need multiple people reinforcing that idea to another group. Once it "takes hold," the network effect can reinforce the idea inside that group and continue passing it on to other teams. Centola's study shows that the idea would move much faster across those influencing teams than it would if the same people were all just "one network."

The good news here is that managers can stop trying so hard to break down the walls between teams to create a single culture or a flat organization. What you really need is to build bridges between them. It is no longer important if everyone in IT is best buddies with everyone in sales. But it is important that a wide bridge of people are friendly and that a different group can say they are connected to marketing. This kind of structure is much easier to achieve than making wholesale changes to culture to instill outrageous amounts of communication. In the end, you will be much more successful in spreading complex ideas and best practices than what you were trying before.

David has been writing on business and technology for over 10 years and was most recently Managing Editor at Enterpriseefficiency.com. Before that he was an Assistant Editor at MIT Sloan Management Review, where he covered a wide range of business topics including IT, ... View Full Bio
We welcome your comments on this topic on our social media channels, or [contact us directly] with questions about the site.
Comment  |
Email This  |
Print  |
RSS
More Insights
Webcasts
Building Asset Management into Your Enterprise Security Strategy
How the Rapid Shift to Remote Work Impacted IT Complexity and Post-Pandemic Security Priorities
More Webcasts
White Papers
A New Take on Cloud Shared Responsibility
The Impact of the SolarWinds Breach on Cybersecurity
More White Papers
Reports
2021 Application Security Statistics Report Vol.1
Gartner Market Guide for Insider Risk Management Solutions
More Reports

@jries921- I think what you are saying meshes nicely with the network fingings here. It isn't so much who who the boss but about making sure the communication likes are open and broad, but not so broad they lose meaning. I think when you are talking about who should be talking to who, you are really talling about the right way. nstead of who reports ot who, it should be who talks to who.
Reply  |  Post Message  |  Messages List  |  Start a Board
InformationWeek Is Getting an Upgrade!

How to Submit a Column to InformationWeek InformationWeek Staff 4/9/2021
White Papers
The Essential Guide to Securing Remote Access
The Impact of the SolarWinds Breach on Cybersecurity
Simplify Your Application Security
Dark Reading Report: Battle for the Endpoint
Smart Service Management: Working Better Together with a Connected Enterprise