SEARCH
A minimum of 3 characters are required to be typed in the search bar in order to perform a search.
Announcements
Event
Discover the latest in hybrid work trends, including new technologies - Learn more at Interop.com!
Event
SupportWorld Live: May 15-20, 2022 | MGM Grand, Las Vegas, NV
PreviousNext
IT Strategy
4 min read
article

10 Tech Tools To Engage Students
(click image for larger view and for slideshow)
Teachers shopping for online resources to use in class this year will be able to tap a directory of apps and websites launching this week that emphasizes reviews from other teachers.

The Graphite website has been live as a beta test since mid-summer and already features hundreds of reviews -- the goal is to have 1,000 by the end of the year. The site was created by Common Sense Media with the backing of Bill Gates and Chicago philanthropist Susan Crown. This is a personal donation for Gates and was not made through the Bill & Melinda Gates Foundation.

Common Sense Media is a non-profit that helps parents understand what content is appropriate -- and is not -- for kids of different ages. It provides reviews of movies, websites, games, TV shows, books and music. For example, here's the short version of Common Sense Media's review of "Kick-Ass 2">: "Insanely violent sequel lacks humor, originality," followed by a "not for kids" icon. It describes "Paranoia" as an "incredibly dumb corporate espionage thriller" with content suitable for 13 and up.

The Graphite site shifts the focus to what apps are appropriate for K-12 educational use, with ratings supplied by teachers as well as editorial staff. Beyond making recommendations, the site will offer practical tips on how these resources can be used, said Mike Lorian, Common Sense Media's general manager for education. "We want to bring an educator's point of view into it, so we're building in the experience of teachers talking through using the apps and what are the best practices followed in schools for using this content."

In addition to a five-star rating system (with editorial staff and teacher ratings shown separately), teachers can add what the site calls "field notes" that offer practical examples of how they have used a specific app or website as part of instruction.

For example, in the review of a NASA guide to the planets app for iOS and Android, Margaret from the The Episcopal Academy in Newtown Square, Penn., rated it a four out of five overall. Among her specific remarks: "I liked that there was such detailed information about each planet, although for my non-readers, it would have helped if there was a way to have the information read to them."

The beta phase of the project included about 5,000 teachers, and the educator review content will likely expand dramatically with the start of a new school year. Teachers whose qualifications have been vetted by the site and who contribute regularly will have their notes featured more prominently, and their star ratings also count more heavily.

.@Graphite is like Consumer Reports for educators. Join the thousands of #teachers who have already started sharing: http://t.co/JgVVzpc1El

"It's more than what you would typically see Google Play or iTunes, which is more just I like it, I kind of like it, I hate it," Lorian said. Reviewers are also asked to follow a specific rubric to rate educational resources according to criteria like alignment to the Common Core Standards or how well they fit into the classroom.

While it's impossible to make reviews comprehensive given the flood of educational apps coming onto the market, Lorian explained that Graphite will try to identify the top ones according to popularity and usefulness while also giving users an opportunity to nominate their favorites. The directory of reviews is searchable by grade level and subject, as well as free, free trial, and paid classifications. 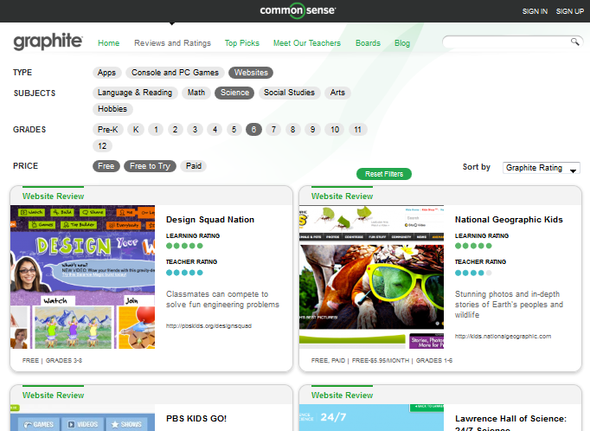