SEARCH
A minimum of 3 characters are required to be typed in the search bar in order to perform a search.
Announcements
Event
SupportWorld Live: May 15-20, 2022 | MGM Grand, Las Vegas, NV
Event
Data Center World is the leading global conference for data center facilities and IT infrastructure professionals.
Report
IT Enterprise Dashboard: This interactive data tool enables access to global research on IT budgets, business challenges
Event
Get in-depth insights & analysis from experts on all aspects of communications, collaboration, & networking technologies
Report
Find out what you need to know so that you can plan your next career steps and maximize your salary.
PreviousNext
IT Strategy
Feature

Outsourcing Not Slowing Down: Study

Eighty-nine percent of respondents to a KPMG study say they plan to maintain or increase their present level of sourcing.
InformationWeek Staff
Contributor
February 13, 2007

Outsourcing is still increasing and organizations involved in this practice either want to maintain their sourcing level or want to increase it, says KPMG’s recent study Strategic Evolution, which is based on responses from more than 650 organizations (both customers and services providers) from 32 countries.

“Outsourcing is not slowing down, in fact it’s growing faster, ” says Pradeep Udhas, Global Head, KPMG Advisory Services. “This industry is going to go much beyond where it is today.”

The study also found that 87% of respondents believe that the statement “as many as half of sourcing deals fail” is a gross simplification, while only 13% believe that it is an appropriate view (See Chart 1).

Regarding the criteria of measuring the success or failure of sourcing arrangements, interestingly 72% of surveyed customers said that either they do not have a defined list of measurement criteria or they do not share them with their service providers. 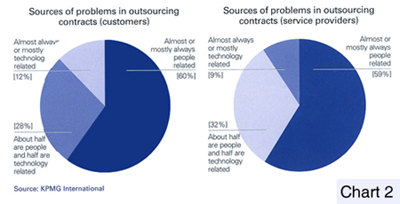