Creative CIOs are getting not only savings but also added flexibility and specialized skills from their IT outsourcers. Just don't expect magic.

Outsourcing. It's the hottest of hot-button issues this electoral season. Small wonder. Along with "the 99%" and "entitlements," it's a loaded, often misrepresented or misunderstood term that encapsulates many of the political, economic, and social issues of the day--including class, foreign policy, immigration, employment, and national security.

Critics lambaste outsourcing as a way for big corporations to replace workers with less-expensive contractors, sometimes (but not always) located in offshore locations with much lower wages. Make no mistake--outsourcing IT operations can reduce costs. Sixty-seven percent of the 289 outsourcing customers in our 2012 State of IT Outsourcing Survey rated cost savings as an outsourcing benefit of 3 or higher, on a 1-to-5 scale where 5 is "primary benefit"; 22% said it's the primary benefit.

But the notion that IT outsourcing is merely a way for companies to slash payroll is, if it ever was true, no longer valid. Even officials in the Obama administration, a critic of outsourcing, admit as much. "On the U.S. side, the outdated perception of an Indian economy that detracts from U.S. production and output is widely seen as an anachronism," said Geoffrey Pyatt, the State Department's deputy assistant secretary, speaking in Chennai, India, last November. Indeed, the cost advantages of shipping work to India, in particular, have eroded as salaries have risen 10% to 15% or more in just the past year, according to various estimates.

Most CIOs now want more from their outsourcers than just a quick boost to the bottom line. They want partners that can help them innovate, give them more business flexibility, and deploy scarce IT resources where and when they're needed. "The magic of outsourcing is giving us the ability to focus on those areas where we can be truly great," says survey respondent Robert Isherwood, CTO at ad agency 22squared.

Like most utilities, Consumers Energy wants to apply breakthroughs in big data processing and analytics to do a better job of monitoring and predicting its customers' energy usage. Doing so will mean lower costs and more reliable service. Its problem was that most employees in its 100-plus-person IT department were too busy with the day-to-day work of maintaining the utility's existing software and systems to work on more strategic projects.

Mamatha Chamarthi, CIO of Consumers Energy, knew the Jackson, Mich., utility needed to bolster its IT resources, but she also knew that finding and hiring more full-time people would be difficult. Really--in Michigan? Turns out that nearby General Motors, under new CIO Randy Mott, is grabbing many of the area's available IT pros as the automaker pulls much more of its tech work in-house and moves away from outsourcing. "It's tough to get good talent right now," Chamarthi says. "The autos are recovering, and no one looks at a utility as a sexy place to work. With Randy Mott around, GM is going to hire everyone who has any bit of IT knowledge."

That reality led Chamarthi to seek an outsourcer. Her goal: Find a company that could take over Consumers Energy's routine IT work in order to free up in-house staff for projects in smart grid, mobility, and analytics. "It was not a cost play," she insists. "It was more about how much business value we were leaving on the table."

After a bidding process that involved 10 vendors, Consumers Energy tapped HCL Technologies for work that will require the India-based outsourcer to build a technology center in Jackson to serve the utility and, eventually, other local companies. HCL's Michigan Technology Development Center, which is scheduled to open by year's end, will initially employ about 100 people and plans are for it to grow to more than 400 over the next few years.

The HCL center will take over support of Consumers Energy's SAP application environment, support the utility's other business apps, and perform break/fix work. "A lot of people think of outsourcing and they think you are taking jobs and shipping them somewhere," Chamarthi says. "We are reskilling our employees, moving them onto strategic projects. We're not laying off our employees. We're building additional capacity by bringing in a partner."

Chamarthi says a key reason she chose HCL over other outsourcers was that the company made a commitment to building a facility in Michigan and hiring locals. "We didn't look at this from a political angle," she says. "We thought: What are our core values? Our core values are to invest in Michigan."

Consumers Energy may be the exception in requiring local work from its offshore IT outsourcer, but it isn't alone in its belief that outsourcing is an effective way to tap a broader pool of IT talent. Some 69% of the respondents to our survey rated the ability to deliver projects beyond what could be done by in-house staff a 3 or higher; 22% gave it a full 5. "If it wasn't for offshore vendors, we would struggle to get the work done in the time required," says survey respondent Carolyn Anderson, operations director at GTESS, a provider of insurance claims processing technology. 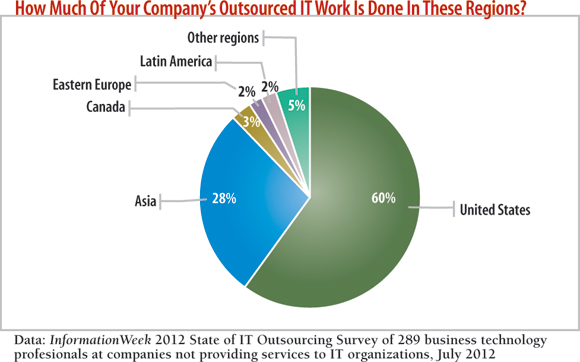 The article's example of CIO Mamatha Chamarthi is very amusing to say the least. On one hand, Mamatha Chamarthi complains that she can't find talented IT workers in Jackson, MI to staff her higer value add projects due to competition from the newly re-surgent GM (Auto Industry). On the other hand, we are expected to believe that HCL Technologies (low cost Indian outsourcer) will be able to staff close to 400 in Andrew, MI in their new Michigan Tech Dev Center nothwithstanding the afore-mentioned compettion from the likes of GM. The only way I see this work for HCL (given their own margin/business pressures) is the classic outsourcing model - HCL hires project co-ordinators and a few staff in Andrew, MI and ships the remainder jobs to low cost centers in India or the other parts of the world. I would expect Info Week to do some more detailed analytical analyses before presenting such info to their readers.
The example of Mamatha Chamarthi and Consumers Energy is simply to put a new spin on the decade old outsourcing trend t make it more to its palatable to US constituents.
Reply  |  Post Message  |  Messages List  |  Start a Board

Somebody's gone to a lot of work and written an excellent article. However,
GET THIS TO YOUR EDITOR:
You have made some client-unfriendly changes.
When we hit the 'Print' Icon, we expect to see the entire article as one page and relatively 'free' of garbage.
On this article, it was necessary to go to page 2 etc., etc. to get the whole article.
The result was also littered with garbage.
Couldn't you have at least given us the courtesy of a .pdf option?
Thank You.
Reply  |  Post Message  |  Messages List  |  Start a Board
Editors' Choice
Hot Topics