SEARCH
A minimum of 3 characters are required to be typed in the search bar in order to perform a search.
Announcements
Event
Discover the latest in hybrid work trends, including new technologies - Learn more at Interop.com!
Event
SupportWorld Live: May 15-20, 2022 | MGM Grand, Las Vegas, NV
PreviousNext
IT Strategy
3 min read
article 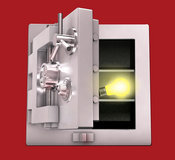 20 Great Ideas To Steal
(click image for larger view and for slideshow)
PricewaterhouseCoopers says 2012 was a banner year for patent infringement litigation. Prior to 2012, there were only three cases that topped $1 billion in damages. In 2012 alone, there were three more of them, including Apple vs. Samsung.

The damages award in the Apple-Samsung jury trial that played out in San Jose Federal District Court was reduced $450 million by the judge from $1.05 billion in March of this year, leaving Apple with a $600 million settlement. In June, Samsung won a ban on iPhone 4 imports based on an ITC ruling that Apple had violated one of its patents. That decision is likely to be challenged by Apple in the appeals court and may even be overturned by the White House.

That back and forth in what amounts to a gigantic, worldwide struggle between the two smartphone makers may become a more common occurrence between market leaders, as the number of patent suits escalates, concluded a PWC 2013 Patent Litigation Study. The number of patent cases typically grows 7% a year. In 2011 to 2012, the number jumped 29% to over 5,000.

The other $1 billion settlements were in the Monsanto vs. DuPont case and Carnegie Mellon University vs. the Marvell Technology Group.

The Monsanto vs. DuPont case settled for a 10-year, $1.75 billion license. The settlement overturned a jury's decision that DuPont, owner of the Pioneer Hi-Bred seed company, needed to pay Monsanto $1 billion for infringing on its patent that covers the embedding of a Monsanto-developed "Roundup Ready" gene in soybeans. The gene makes soybeans resistant to the pesticide, Roundup, which allows the pesticide to be used in support of a larger soybean crop.

The Carnegie Mellon vs. Marvell remains in the post-trial phase. In December, a third federal district court jury awarded the university a $1.17 billion verdict against Marvell for infringing two of its patents. Marvell produced chips that incorporated what Carnegie Mellon said was its patented technique for how accurately hard disk drive circuits are able to read data from high speed disks, according to a Reuters account. Marvell has said it will ask the judge to overturn the verdict and, if necessary, will appeal it to the U.S. Circuit Court of Appeals.

The growth in the number of cases is somewhat on track with the increase in the number of patents issued by the U.S. Patent and Trademark Office, which has increased each year since 2009, the report said.

"Patent infringement litigation shows no signs of cooling off, either as a means of generating revenue or of protecting competitive advantages," the report concluded.