SEARCH
A minimum of 3 characters are required to be typed in the search bar in order to perform a search.
Announcements
Event
Discover the latest in hybrid work trends, including new technologies - Learn more at Interop.com!
Event
SupportWorld Live: May 15-20, 2022 | MGM Grand, Las Vegas, NV
PreviousNext
IT Strategy
2 min read
article

Service-level agreements. We all get them, but do you believe in them, read them, negotiate them--or doubt they're worth the paper they're printed on?
InformationWeek Staff
Contributor
June 16, 2011
>> Be consistent in the monitoring process. Develop a reporting scheme that is followed every month and loops in the customer stakeholders and the service provider point of contact. Don't wait until there's an SLA violation.

>> Be persistent in pointing out noncompliance with the SLA agreement. Many survey participants expressed frustration in trying to collect penalties. It's natural to press only so far, then give up in frustration, but resist.

>> Develop a "team" mentality. Most providers want their service consumers to be happy and profitable, so it's worth periodic reminders that you're in this together.

The ability to negotiate SLAs comes down to two main elements: Who has the highest perceived value, and what are the options available to either party? If your company isn't in the Fortune 500, you can bet large service providers will be less inclined than hungry startups to negotiate customer-specific SLA terms. While it may seem less risky to go with an established provider, as a service consumer, there is a benefit to having a perceived high value to your partner. Among survey respondents buying services, the vast majority of SLAs (79%) are, in fact, negotiated. We attribute this in part to the rise in use of cloud service providers; given the newness of many of these companies, they're more likely to deal.

But they don't always. Bill Lowell, a telecommunications manager with American Engineering Testing, says he hasn't been able to negotiate any changes to his SLAs and feels like a captive, though things are changing as more service providers enter the arena. "If you have options, providers generally will at least say they're considering SLA changes," Lowell says.

The goal is to "trust but verify," with SLAs the bedrock of that verification.

Frederick Rose is the service assurance practice director at Fusion PPT. Write to us at [email protected]. 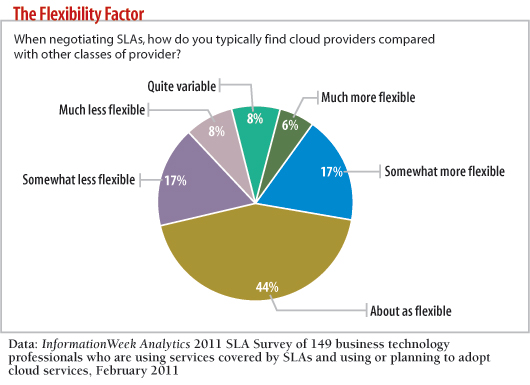