SEARCH
A minimum of 3 characters are required to be typed in the search bar in order to perform a search.
Leadership
6 min read
article 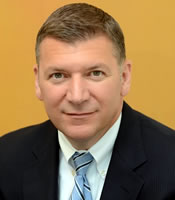 Len Peters
Yale is one of the nation's premier educational institutions, and a model of stability in IT management; former CIO Philip Long spent 10 years in that job and 40 in IT at Yale before retiring in 2011.

Yale stayed in the Ivy League, plucking Columbia Business School CIO Len Peters as Long's successor. Peters is now developing a long-term vision for Yale IT. Before working in higher education, Peters spent years working in corporate IT at firms including Merrill Lynch, General Electric, Berkshire Hathaway and Cendant. He continues to teach a graduate-level course on enterprise-wide applications and project management at Columbia.

Most important career influencer: There've been many. I worked at Merrill Lynch for a long time and had some great mentors. I worked for Lenny Accardo, who was a young, dynamic leader and, me being young myself, I saw him as a role model. He pushed me out of my comfort zone. Before we called things PMOs, he asked me to organize his portfolio. I worked for Madge Meyer, the chief innovation officer at State Street Bank now. She was my manager for a while at Merrill. I always felt I could learn something from her.

[ Take a spin through the history of education technology. Read Tablets Rock On: Education Tech Through The Ages. ]

Career accomplishment I'm most proud of: The development of people and organizations. That then results in other things, like better technology solutions and increased customer satisfaction. At one point I ran Merrill's global support system, supporting about 125,000 workstations worldwide. When I took over, customer satisfaction was about 65%. By the time I left that job four years later, we were at 93%. When I joined Columbia Business School, student satisfaction [with IT] was less than 50%, and when I left it was over 90%. We've started down the same path here at Yale. When I got here, community satisfaction with IT was less than 50%. Now it's 79%, which is a major improvement.

Why do you do what you do? As a kid I was always fascinated with technology. I bought a Timex Sinclair computer and taught myself how to program on it in high school. I've always loved technology. And I still love it. I wish I had more time to dig into the details.

One thing I wish I could do over: I'm kind of like Frank Sinatra -- no regrets. I took a little bit of the path less traveled, in that after high school I went to work and many of my friends went off to college. I was on the extended part-time college program. Maybe I would change that. Then again, after I was in the workforce for four years my friends came out and didn't find jobs as good as the one I had.

Top initiatives: One of the priorities is to think about how ITSM (IT service management) and traditional IT governance co-exist. The person who's running ITSM is also managing governance.

We have a lot of work ahead of us in research data services. At a research institution like Yale, we have a number of high-performance clusters and amazing instrumentation [that are] producing terabytes and petabytes of data on a daily basis. We need better ways to capture that information, manage it and preserve it. Plus we have unstructured data like video, images and so on.

We need to create a smoother, more efficient user perspective. We've had hundreds and hundreds of websites and apps developed over the years. We've got a project we dubbed the Yale Hub, all about creating a unified, simplified user experience, that incorporates social and mobile capability.

We're also moving off of Oracle ERP and transitioning to a cloud-based solution called Workday.

One thing I want to do better: Accelerate the pace of change. I've never seen technology evolve so quickly. We need to be more agile and quicker.

Hardest thing about what you're doing: It's related to accelerating the pace; how do you get the right level of community engagement while moving quickly?

IT budget: Operating budget is $110 million. The capital budget is about $30 million.

Size of IT team: I'm the associate VP of ITS, the central IT organization. If you include contractors, about 500 people. I'm the university CIO, so I oversee technology for the university, and there are IT partners that are not part of the central group and don't report in through me. There's probably another 300 people on campus, at schools like management and law, who are IT professionals that aren't part of my budget.

What I want from tech vendors: I want them to understand what my challenges are, to really spend the time, not necessarily with me but with my staff, understanding what it is we're trying to accomplish.

The most disruptive force in my industry Massive open online courses. Is it disruptive? That's yet to be determined. We don't know. It appears to be disruptive. We'll have to see how this turns out in the course of the next year or two.

The most overrated IT movement: Big data. I think it's a marketing term.

Len Peters At A Glance
Education: Bachelor of Arts from Molloy College, master's degree in technology management from Columbia University. Person I'd most like to have lunch with: Probably the new pope. It's kind of current news, and I'd love to talk with him. Yes, I am Catholic. First job: Delivery boy for Boone's Deli when I was 14 years old. I delivered fruits and vegetables in Brooklyn. Sometimes I worked the deli counter. If I weren't a CIO: I'd probably be a full-time teacher. I love teaching.