Healthcare Robotics: Patently Incredible Inventions
(click image for larger view)
The federal office in charge of encouraging the use of digital tools to improve the nation's healthcare delivery will have two new leaders after next week.

Farzad Mostashari, chief of the Office of the National Coordinator (ONC) within the U.S. Department of Health and Human Services, announced he was leaving in August. Last night, he and principal deputy national coordinator David Muntz sent email to ONC staff announcing that they would both be leaving Oct. 4.

"David Muntz and I have been honored to work together leading this exceptional organization, and we will be departing together as well," Mostashari wrote. "David informed me several weeks ago of his decision to return to the private sector to work more closely on the front-lines of medicine, but I asked him to hold off on any announcement until we could complete the transition planning."

Prior to joining ONC, Muntz was the senior VP and chief information officer for the Baylor Health Care System. In 2011, he was included on the Information Week 500 list of the "Top 25 Most Influential Leaders in Healthcare IT." He joined ONC as deputy director in January 2012.

"I look forward to continuing to support HHS' vision of achieving interoperability and better engaging patients from the private sector," Muntz wrote in his resignation email.

Mostashari says he plans to keep up active Twitter commentary on the progress of health IT, albeit under a different handle. 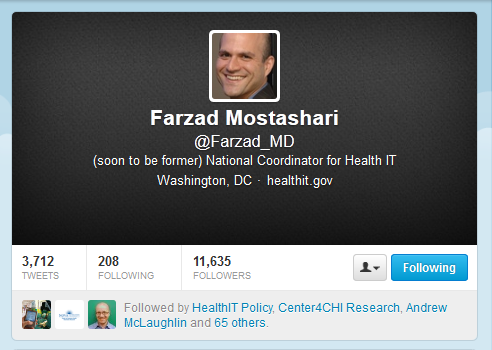