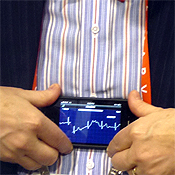 9 Cool Digital Health Products
(click image for larger view and for slideshow)
The Gingrich Group, which includes Newt Gingrich's think tank, the Center for Health Transformation (CHT), has filed for Chapter 7 bankruptcy. Gingrich severed ties with CHT when he began seeking the Republican presidential nomination in May 2011, and a Gingrich campaign spokesman told the Wall Street Journal that CHT's bankruptcy is a result of its founder's departure.

CHT was a major promoter of health IT both before and after the passage of the HITECH Act, part of the 2009 stimulus law that established the government incentive program for "meaningful use" of electronic health records.

Back in 2007, when Allscripts and several other technology companies formed the National e-Prescribing Patient Safety Initiative (NEPSI), which offered free e-prescribing software to physicians, Gingrich appeared at the press conference. "In the 21st century, the legibility of a doctor's handwriting should not determine whether a patient lives or dies," said the former Speaker of the House of Representatives in urging widespread adoption of e-prescribing. Later, Gingrich wrote the introduction to a book on the topic entitled Paper Kills, which was edited by CHT project director David Merritt and published by CHT press.

[ Read How Will Our Next President View Health IT? ]

On the campaign trail, Gingrich has decried President Obama's stimulus legislation. But the New York Times reported that he praised the EHR incentive program to healthcare executives in January 2009, shortly before the stimulus bill was enacted.

Afterward, CHT joined with Allscripts and Microsoft on an "Electronic Health Records Stimulus Tour" that sought to persuade hospitals and physicians to adopt EHRs to get incentive funds.

CHT was more than a think tank. It was an advocacy organization that tried to influence health policy, and its members included some of the largest pharmaceutical, health insurance, and health IT software vendors. Some called CHT a lobbying group, although Gingrich has steadfastly denied that.

Last November, The Washington Post reported that CHT had collected $37 million from member healthcare and insurance companies between 2003 and 2011. CHT charged participating firms as much as $200,000 each, the Post said. Among the biggest sponsors were AstraZeneca, Merck, Novo Nordisk, BlueCross BlueShield Association, and UnitedHealth Group.

Barnes said it is not unusual for industry thought leaders to testify before Congress on a particular subject or to have informal meetings with people on Capitol Hill. Barnes himself has testified before Congress, he noted. So have representatives of associations such as the e-Health Initiative Foundation, the Electronic Health Record Association (EHRA), and the Medical Group Management Association (MGMA). Greenway pays dues to MGMA as an affiliate member, but Barnes never regarded the Congressional testimony of its employees as lobbying, he said.

Barnes said he'll be sorry to see CHT, which he calls "bipartisan," disappear. "Newt Gingrich brought together thought leaders from Capitol Hill and the private sector and also injected his own ideas," he said. "Together, we accomplished great things."

Among those things, he added, were advocating on behalf of healthcare delivery reform, pushing for modernization of the Food and Drug Administration's drug approval process, and getting doctors to adopt health IT.