SEARCH
A minimum of 3 characters are required to be typed in the search bar in order to perform a search.
Announcements
Report
How does your salary stack up? 2022 IT Salary Survey Results Revealed
Event
Learn about the latest technologies that are revolutionizing identity governance and access management
PreviousNext
Leadership
4 min read
article

Inside Eight Game-changing MOOCs
(click image for larger view and for slideshow)
Despite earning that coveted "seat at the table" with education leaders, 44% of higher education CIOs surveyed reported having inadequate resources to manage information technology effectively.

The 2013 Higher Education Technology Survey report was compiled by Consero Group, the organizer of an invitation-only event for higher education CIOs in April, which I was allowed to audit. I wrote about it in stories on political and technological trends and the debate over the impact of massive open online courses (MOOCs).

Attendees who helped me interpret the survey results cautioned against letting this small sample (a total of 41 responses) speak for all of higher education. Still, it gives an overview of the sentiments of that group, which included CIOs from major universities as well as small liberal arts colleges.

[ Who owns the content of an online course? Read MOOCs: Interesting Legal Territory Ahead.]

The headline Consero CEO Paul Mandell drew from the results was that 78% of the CIOs said their departments have little or no ability to stop students from using information technology to cheat: 30% said they had no ability to prevent cheating, while 48% classified their ability to prevent it as "low." Mandell said he added that question to the survey at the suggestion of one of the attendees, given the pervasiveness of technology on campus and the extent to which it is used to deliver instruction and assessments. "With the evolution of technology generally, the ability to cheat has evolved," he said. So he found it surprising that the vast majority of the respondents said the IT function is not involved in preventing cheating.

Campus CIOs I followed up with suggested cheating is more of a student conduct issue than an IT issue. "I would see it as part of my responsibility in being a cabinet member to curb cheating, but not specifically because of the technological aspect," Joseph Vaughan, CIO at Harvey Mudd College in Claremont, Calif., said in an email. "For what it's worth, at Harvey Mudd (which is very small), cheating is covered under an honor code system that is very vigorous. Academic misconduct cases are overseen by a student elected and student run group. We have closed book exams that students do in their dorm rooms, believe it or not."

"I'm not particularly concerned about it," agreed Bob Johnson, VP and CIO Rhodes College in Memphis, Tenn. In a phone interview, he said plagiarism prevention services such as Turnitin can be very effective, but trying to combat every possible form of technology-assisted cheating would be fruitless -- nor has it been something that faculty or the school's student conduct leaders have pressed him to make a priority.

-- Concern about security. While 90% said their school had not experienced a data security breach over the past 12 months, more than half (52%) said their schools are insufficiently prepared for a breach.

-- Environment is a priority. A majority (63%) said that it is "moderately" or "extremely" important that its partners or providers implement "green" or environmentally friendly practices.

-- Static Staff Size. A majority (73%) said their staff size either remained the same or increased by no more than 5%.

Johnson said he took some of these results with a grain of salt. For example, how could you ever be sufficiently prepared for a security breach? "The question presumes that it's happened," he said. "I looked at that and said, 'Are we prepared? As much as anyone, I suppose.'" Similarly, he doesn't find it surprising that a significant minority of the CIOs complained of lack of resources, given that everyone would always like to have more.

"The real question is, is the job doable with what you have?" Johnson said. "I was one of those who said, 'Yeah, I've got enough,'" even though his school is not as wealthy and does not spend as much on technology as some others represented at that conference. When there's a real need, something that is important to parents and the quality of education, he said, it gets funded. 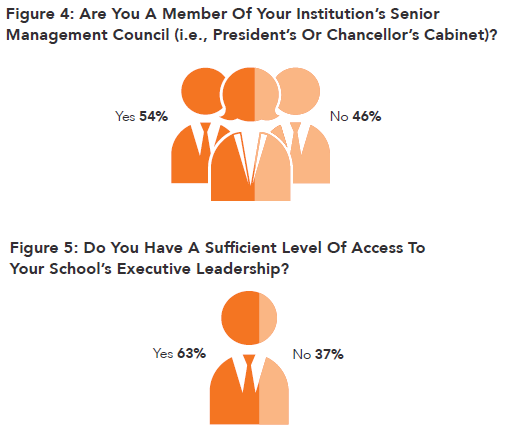 Excerpt from the Consero survey.