One of my ongoing side projects involves building an iSCSI/NAS server for use in my labs. As part of that effort, I've been looking at a bunch of different removable drive cages so I can swap drives in and out of the box as needed. There's actually a fair number of these things to choose from, and they come in a surprisingly large number of form factors, with just as many features.

But one class of units in particular really grabbed my attention, not because they would be usable for this particular application, but because I couldn't really figure out what they would actually be useful for. What I'm talking here about the miniature drive cages that cram multiple 2.5" SATA drives--laptop drives, basically--in a single 5.25" bay, such as the QuadraPack Q14 from Enhance Technology (shown below), the XC-12-2 from AIC, and the MiniSTOR 2 from Rancho, among others. 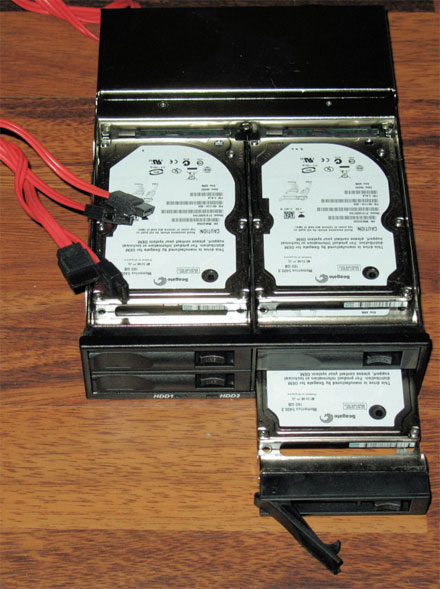 The natural immediate response to seeing these kinds of units is that they seem like a pretty clever engineering hack. Since a pair of 2.5" drives side-by-side are less than 5.25" wide, and since the drives are thin enough to be stacked pretty tightly, it's possible to fit up to six of them into a single 5.25" drive bay. But then there are the practical details...

For one, there is the performance factor. Generally speaking, 2.5" drives have modest RPM speeds and small buffer sizes, reflecting on their common usage in applications where size matters more than performance, such as laptops, portable USB drives, networked printers and copiers, and other tight-fitting systems that cannot make performance the top priority.

While there are high-performance 2.5" Serial-Attached SCSI (SAS) drives that are entirely suitable for general-purpose storage (and which are commonly used in upscale applications such as blade servers), those drives also have prices that are 4 times to 6 times higher than the drives that are typically used for compact applications.

Moreover, these 2.5" drive cages are small, but they're not that small-- --they use a whole 5.25" drive bay--and anything that can hold a full-sized drive would also be big enough to hold a regular-sized drive. Simply put, the size penalty ought to be a non-issue for the kind of applications where these cages would be installed.

Also, you can get a regular-sized hard drive that holds up to 750 GB of storage, while the largest 2.5" drives only hold 160 GB, meaning that a single normal drive will deliver more capacity than some of these drive cages even when they are fully populated. And while 2.5" SATA drives are a fraction of the cost of their SAS counterparts, a regular 3.5" desktop-class SATA drive is cheaper still, especially if you only have to buy one of them.

Overall, common sense tells us that there just isn't much of a reason to use these things, and that they are probably engineering novelty items with little or no practical application. That was also the consensus opinion among friends and peers that I showed these units to, and only one other person expressed the sentiment that they might be feasible in narrow applications. Even some of the storage vendors that I talked to expressed discomfort at the idea of using these drives for anything significant, with only a couple of them pointing out that 2.5" drives are routinely used by OEMs and VARs for vertical applications.

After testing some drives and carriers over the past few weeks, however, I'm happy to report that the consensus opinion has proven to be wrong, and that these devices are entirely practical for several important applications. In particular, the form-factor makes them especially useful for rack-mount and small-form-factor systems like departmental NAS boxes that require RAID for local storage, but which do not have enough physical space for four full-sized drives. Another area of potential use is mobile or industrial systems, since laptop drives typically have very high shock and vibration ratings.

Furthermore, once the SATA drives were bundled together into a RAID setup, the magic of multiple spindles made performance a non-issue, with throughput numbers that were significantly higher what is available from a single desktop-class SATA disk. While the numbers aren't impressive enough to consider this option for enterprise-grade storage, they are more than sufficient for things like boot drives and local backup storage.

In fact, I'm so impressed with these things that I'm now considering this application for use in my lab, either as RAID boot drives for some local systems, or for RAID storage on my rack-mount servers at the remote data center (a co-hosting facility), none of which have sufficient space to handle four full-sized drives easily. All could benefit from the reliability and performance afforded by these miniature RAID arrays.