The high-performance computing system combines a workstation with a computing cluster to give users extra computing power at their desks.
Antone Gonsalves
Contributor
November 12, 2009 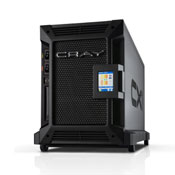 Cray CX1-iWS High Performance Computer
Cray, Dell, and Microsoft on Thursday introduced a high-performance computing system that combines a workstation with a computing cluster to provide researchers and engineers additional computing power at their desks.

The Cray CX1-iWS, which will be sold exclusively by Dell, comprises one blade server powering a Microsoft Windows 7 workstation and a maximum of three others for running a Windows HPC Server 2008 cluster. Each blade has two quad-core Intel Xeon 5500 series processors.

Having a computing cluster in the same box as a workstation means researchers and engineers don't have to spend time and resources on connecting to a larger, external cluster for smaller jobs, according to the vendors. The hardware includes shared storage, so users can move work from the workstation to the the cluster side of the box without leaving the Windows environment.

"With this new product, Cray expects to provide HPC capability to a wide new audience that includes R&D groups in small and medium-size businesses, organizations needing to solve problems beyond the limits of traditional workstations, and people wanting to implement distributed HPC in the enterprise," Ian Miller, senior VP of the productivity solutions group at Cray, said in a statement.

The new system includes a 16-port Gigabit Ethernet switch and a Nvidia Quadro graphics card that can support up to two monitors. A fully loaded system includes eight 2.93-GHz Xeon processors with 24 GB of memory per node, 160 GB of disk per node, 4 TB of storage, and a Nvidia Quadro FX 5800 graphics card. Two other configurations are available with fewer cluster nodes and less memory and storage. The starting price is $40,000.


InformationWeek Analytics has published an analysis of the current state of mainframes. Download the report here (registration required).