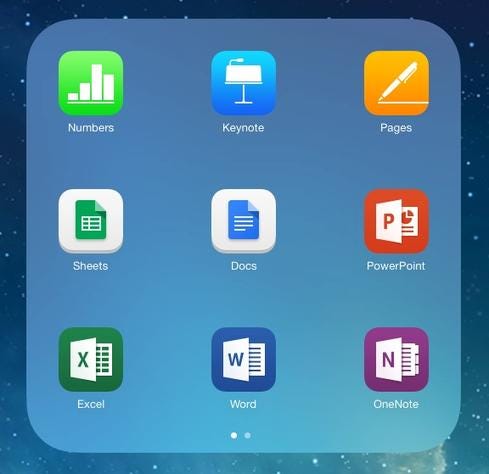 Google recently indicated it will no longer offer its Quickoffice mobile productivity suite to new users. The app, which Google acquired two years ago, has been integrated into Google's existing Google Drive product. Google said it plans to pull Quickoffice from the Google Play Store and iTunes App Store in the coming weeks.

Founded in 2002, Quickoffice eventually offered several versions of its mobile productivity suite. Its key feature was compatibility with Microsoft Office. Quickoffice allowed mobile device users to view, edit, and create Word, Excel, and PowerPoint files from a variety of different handsets and tablets. Google picked the company up in 2012 and later re-released the app for free. Quickoffice is preloaded on many devices that ship with Android 4.4 KitKat. Now it is headed for a dirt nap.

"With the integration of Quickoffice into the Google Docs, Sheets, and Slides apps, the Quickoffice app [will go away]," Google explained in a short blog post. "Existing users with the app can continue to use it, but no features will be added and new users will not be able to install the app." In its place, Google expects mobile device owners to use Google Drive and its associated apps.

Until recently, Google Drive incorporated Docs, Sheets, and Slides into a single app. Google Drive not only provided access to online files, but allowed mobile device users to open, edit, and create them. Google, however, broke the suite apart into four separate apps earlier this month. Now Google Drive stands alone as a file management tool. Android and iOS users who want to create a new document need to install and use the three separate Google Drive apps on their device.

Long-time users of Google Drive were not happy with the change. While the apps gained certain new powers (think collaboration and commenting support), it upped the number of installed apps from one to four for those who require the ability to interact with documents, spreadsheets, and presentations. That said, Google Drive and its associated apps are more adept than ever, especially when it comes to opening and editing Word, Excel, and PowerPoint files. Drive also makes sharing documents a breeze, which can be sent to others as attachments or via direct links.

Google Drive, Docs, Sheets, and Slides are available for free to Android and iOS devices, but not to Microsoft's Windows Phone platform. Windows Phone includes a native version of Word, Excel, and PowerPoint. Microsoft does offer a free version of Office Mobile to Android and iOS devices for home use, though it some cases it requires a subscription to Office 365 for business customers to access all features.