SEARCH
A minimum of 3 characters are required to be typed in the search bar in order to perform a search.
Announcements
Alert
Got some free time? Grow your knowledge from the comfort of your computer for FREE!
Alert
Are you looking to stay on top of IT trends? Check out our FREE webinars and virtual events!
Alert
Planning for 2023? Be sure to check out our upcoming in-person events!
Report
How does your salary stack up? 2022 IT Salary Survey Results Revealed
PreviousNext
Mobile Applications
3 MIN READ
News

The PowerMeter software displays data provided by the new generation of network-ready smart power meters that are being installed by various utilities.
Thomas Claburn
Editor at Large, Enterprise Mobility
May 20, 2009 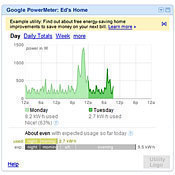 In a move to connect the emerging smart energy grid with the Internet, Google on Wednesday announced partnerships with eight national and international energy companies to allow consumers to access data about their energy usage through Google's PowerMeter gadget.

Google PowerMeter is a software application that can be embedded on the company's iGoogle personal home pages. It displays data about home energy usage, data provided by the new generation of network-ready smart power meters that are being installed by various utilities around the world.

Armed with information about their energy usage, consumers can modify their appliance usage habits to save energy and money. And doing so allows utilities to operate more efficiently.

Hal D. Snyder, VP of customer solutions for SDG&E, says that his company is in the process of installing more than 1.4 million smart meters in the San Diego region. The project is expected to be completed by the end of 2011. Its goal, he said, "is getting information in the hands of our customers so they have control and can utilize it in their day-to-day lives."

"Just getting this information in the hands of our customers, these customers could reduce energy usage by 5% to 10%," he said.

Snyder says that Google isn't the only tech company looking to link the Internet to the emerging smart energy grid. "All I can say is Google is the first; you'll see others," he said. "We have an open architecture. We're not just committed to Google."

SDG&E goals go beyond empowering customers. Like other utilities, it sees business opportunities in the connection between the power grid and the Internet. Smart meters are only one facet of the smart grid.

"Once we get this information into the home, the next step is the automation of home energy usage," said Snyder.

The two-way communication capabilities of smart meters will allow enable scenarios in which consumers with energy-generation or storage capacity have the opportunity to sell energy back to utilities.

"As more and more homes have solar panels or small fuel cells, we're going to see a need to have the ability to manage all that energy," Snyder explained.

What remains to be seen is the extent to which the opportunity to conserve power becomes pressure to do so. Just as Internet service providers have expressed interest in discriminatory pricing as a way to manage bandwidth costs, utilities could seek to charge more for specific usage patterns, scenarios, or appliances.

And there could be a social cost to failing to curtail one's energy expenses. It's not that far-fetched to imagine extravagant energy consumption becoming a liability in certain circles, like driving a gas guzzler.

Information is power, as is information about power usage. Hope that Google and power companies use that power judiciously.


Attend a Webcast on reducing data management costs and focusing on business goals. It happens June 11. Find out more and register.