SEARCH
A minimum of 3 characters are required to be typed in the search bar in order to perform a search.
Announcements
Alert
Got some free time? Grow your knowledge from the comfort of your computer for FREE!
Alert
Are you looking to stay on top of IT trends? Check out our FREE webinars and virtual events!
Alert
Planning for 2023? Be sure to check out our upcoming in-person events!
Report
How does your salary stack up? 2022 IT Salary Survey Results Revealed
PreviousNext
Mobile Business
2 MIN READ
News 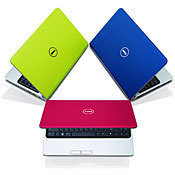 Dell on Thursday introduced a thin laptop aimed at students looking for a mobile entertainment PC that also can handle the more mundane homework assignments.

The laptop is slightly more than an inch thick at its thickest point and has a starting weight of 4.3 pounds. The PC is powered by either an Intel Pentium dual-core processor or a faster Intel Core 2 Duo chip. The system comes with an integrated Nvidia GeForce 9400M graphics processor and 3 GB of system memory.

Other features include a 1.3-megapixel Webcam and facial-recognition software to prevent unauthorized access. A six-cell battery is standard with the system, but Dell also offers an eight-cell model for up to 6.75 hours of battery life. Wi-Fi is also standard, but Bluetooth wireless support is optional, along with an external DVD or Blu-ray disc drive.

The Studio 14z is available in a half-dozen colors and has a starting price of $649. Dell is releasing the system in time for the back-to-school season, one of the busiest times of the year for computer makers.

Dell unveiled the student-focused laptop the same day it reported a 63% drop in profits and a 23% decrease in revenue for the fiscal first quarter ended May. The declines were caused by a drop in PC sales as a result of the economic recession. While business PC revenue fell by as much as 31%, sales of consumer PCs dropped 16%.