There have been cheap Android tablets for a while. The NOVO7 hints at a lot of quality to come.
Larry Seltzer
Contributor
January 22, 2012

The starting price of the iPad 2 is $499. For that price you can buy five NOVO7 Basic tablets from Ainovo running Android 4.0. Can the NOVO7 possibly be as good as an iPad? The answer is no, but it's not that bad, either.

The first thing to note about the NOVO7 is that it's smaller than the iPad. The screen measures 7 inches diagonally compared to the iPad 2's 9.7 inches. Clearly that's part of why it's cheaper. But the main reason it, and Android tablets in general, are cheaper is because of competition. Apple doesn't yet have to consider itself up against Android tablets in the market, but Android tablets are definitely up against each other.

The first generation of Android tablets from 2011 were mostly garbage. At the low end they kept costs down with touchscreens based on resistance and other inferior technologies. High-end touchscreens, such as the ones in the iPad 2 and NOVO7, use capacitance (the human finger conducts electricity and thereby distorts an electrostatic field in the screen). The old Android tablets also ran Android 2.x or 3.x, neither of which were well-suited to a tablet. Android 4.0, a.k.a. Ice Cream Sandwich, was designed for both tablets and smart phones. 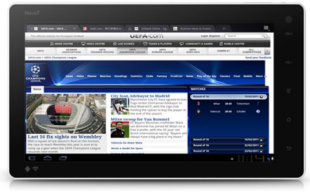 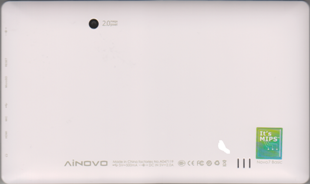 The Ainovo NOVO7 Basic tablet is no iPad, but at one-fifth the price it doesn't have to be.

I had almost forgotten about MIPS, once a RISC pioneer and big-time workstation CPU company, when the news of the NOVO7 hit. It uses the MIPS architecture Ingenic XBurst JZ4770 CPU running at 1GHz, plus a Vivante GC860 GPU and VPU. We got our review tablet from MIPS, which seems to be doing all the publicity for it on this side of the Pacific.

The NOVO7 Basic has many features, such as front (0.3 MP) and rear (2.0 MP) cameras and an HDMI port capable of outputting 1080p video, that are not present in the Amazon Kindle Fire. A version of the NOVO7 without cameras or HDMI costs $10 less. It has a 5-point multi-touch capacitive touchscreen with an 800-pixel-by-480-pixel resolution and a 16:9 aspect ratio, and an SD card slot. System memory is 512MB and onboard storage is 8GB. There is no GPS hardware.

One side of the device holds the main interfaces: a headphone jack, HDMI port, microphone, mini-USB port, SD card slot, reset pin hole and power jack. Our device didn't come with a power adapter and we always charged it through the mini-USB.

Yes, that's mini-USB, not micro-USB, the slightly smaller and much more popular plug. According to MIPS the mini-USB was chosen because of component availability at the time of manufacture. This is a slightly weird situation. You'd think it would be a problem for the device in the U.S. market.

Thing is, this NOVO7 Basic tablet was not made for the U.S. market. It was made for the Chinese market. You can buy it on the Ainovo site for $99 (I'm told it costs less than that in China) but, like all Android devices for the Chinese market, it lacks some minor features such as access to the Google Android Market or Google Mobile Services. This might also be part of the decision not to include GPS.

We had trouble installing several apps. This is likely because they were built using non-MIPS native code.
We were able to go to other Android stores, including the Amazon store. Presumably in China these sites are blocked at the Great Firewall. But we ran into problems with some apps: several (including Adobe Reader and the great game Cut The Rope), would not install, with Android complaining of corrupt packages and similar errors. According to MIPS the typical reason for such problems is that "some applications were originally compiled using a (non MIPS architecture) Android Native Development Kit (NDK), and may not run directly on this tablet."

According to MIPS, "more than 90% of Android applications will run on this device." It's reasonable to assume that problems such as this will diminish over time, especially since Android tablets based on other processor architectures, such as Intel's, are forthcoming this year.. MIPS adds that "US versions are already in production and will carry the Android Market, which correctly displays the apps that are guaranteed to work with the device."

We never came close to running out of battery life on the NOVO7, but we didn't really press the device. It should get seven hours of Web surfing on a full charge. Performance was not blazing, but not bad. There were a lot of little delays, but not major ones. Graphics performance in games was very good. Web surfing in general was sluggish. Video looked very good; a MIPS demo of the device on YouTube shows them demonstrating 1080p video out the HDMI port.

At $99 this tablet doesn't have to be top-of-the-line. The Chinese edition of the NOVO7 Basic has a bunch of problems, but it's reasonable to believe that all of them will be fixed in the coming months. The era of the cheap, high-quality Android tablet is here. Almost.


The NOVO7 Basic is an impressive tablet, far better than the crop of Android tablets from last year. Problems remain between existing apps and the MIPS architecture of the NOVO7, but these should be resolved in the near future.