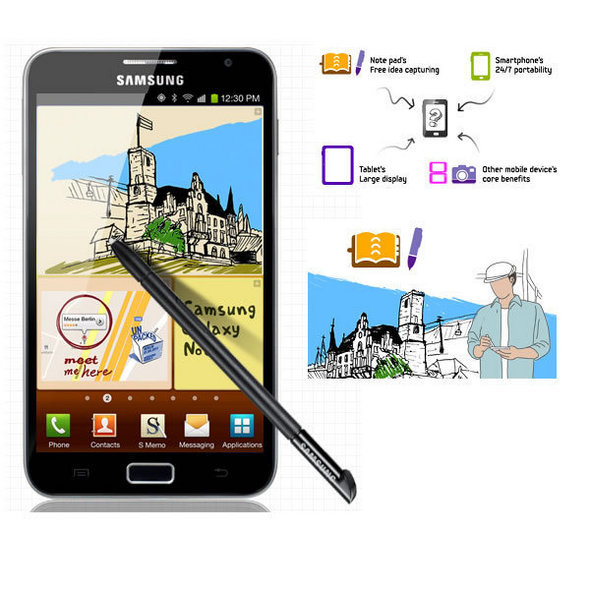 The success of the first-generation Samsung Galaxy Note proves two things: 1) People really like big-screen phones; 2) The stylus isn't dead after all. Introduced in October 2011, the original Galaxy Note had something in common with most Adam Sandler movies--namely, critics hated it, but the common folk loved it.

Samsung certainly got the last laugh. The company estimates it has sold 10 million Galaxy Notes worldwide--not too shabby for a 5.3-inch phone that reviewers derided for a number of reasons. The phone was too big to fit in your pocket, they said. Its stylus was an unnecessary appendage in the era of touchscreens. And the Note's cheap, plastic casing was subpar for an expensive handset.

While these gripes had merit, the phone's pros obviously outweighed its cons. For reading and Web browsing, a larger display is almost always better. The behemoth Galaxy Note was big enough to replace two devices--a 4-inch smartphone and a 7-inch tablet like the Amazon Kindle Fire. The Note, weirdo that it was, had established a new product category: phone-plus-tablet, or "phablet."

It appears the phablet may have a bright future too. ABI Research estimates that annual phablet shipments will top 208 million in 2015. "The larger screen sizes make a significant difference to the user's experience when compared to conventional-sized touchscreens between 3.5 to 4 inches," said ABI Research senior analyst Joshua Flood in a May statement.

This isn't to say, however, the Samsung Galaxy Note is the ideal phablet. In fact, the verdict is still out on the long-term viability of the device's S Pen stylus, which young tablet users consider a "completely unnecessary" and "outdated" peripheral on Samsung's new Galaxy Note 10.1 tablet.

CouponCodes4u.com recently polled about 2,000 Americans aged 21 to 35, and 53% of respondents said they wouldn't buy a tablet that came with a stylus. It's possible, however, that a pen makes more sense on a smaller screen, where buttons, letters, and numbers are smaller and hence easier to tab with a pen than a fingertip.

Wednesday, Samsung launched its second-generation Galaxy Note, which features a slightly wider, 5.55-inch AMOLED screen with a 16:9 aspect ratio, a 1.6-GHz quad-core Samsung Exynos CPU (the U.S. version will likely have a dual-core chip that works better with 4G LTE networks), 2.GB of RAM, and Android 4.1.

Click through the slideshow below to see the best apps for the Galaxy Note or Galaxy Note II and the S Pen stylus.