What did you miss as Google and Facebook hogged the headlines this week? Catch up on these key developments.
Eric Zeman
Contributor
May 25, 2012 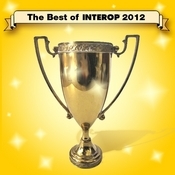 The Best of Interop 2012
(click image for larger view and for slideshow)
Sure, Google now owns Motorola, Google beat Oracle in court, Yahoo introduced a mobile search browser, Apple and Samsung's CEOs failed to mediate their patent dispute, and Facebook somehow managed to bungle its IPO. But tons of other important things happened in technology this past week.

Here are 10 announcements that were made in the past week that may not alter the landscape of the technology world, but will have an impact all the same.

Facebook's Instagram Clone: In what is surely a head-scratcher, Facebook introduced the Camera for iPhone application, its own version of Instagram. If you recall, Facebook agreed to buy Instagram for $1 billion earlier this year. The debut of this app ahead of that deal's closing is puzzling to say the least. The app lets Facebook users take, edit, and share photos directly to Facebook, as well as view the photo feeds of their friends.

Overhauled Google Search for iPhone: Google provided a significant revision to its iOS search application this week. Google Search 2.0 for the iPhone is meant to be much faster to use. The app loads results, images, and auto-completes text faster, and makes it easier to jump to other Google Apps.

Verizon's Viewdini Video Search Tool: Verizon Wireless wants to make it easier to search for and view video content. Enter Viewdini, a new search tool that is meant to tackle all your video searches from a single portal. Using Viewdini, searches for, say, "The Hulk," will show Verizon device owners which video outlets offer "The Hulk" and whether or not they cost anything. Viewdini will comb Netflix, Hulu Plus, mSpot, TV sites, movie studios, Comcast's Xfinity TV, Verizon FiOS, and cable operators' offerings for the content, and then let people watch it through whichever platform them prefer.

Absinthe Debuts Untethered Jailbreak for iOS 5.1.1: Yes, believe it or not, some people still seek to shed the shackles of Apple's iron-like grip on iOS. Thanks to Absinthe 2.0, owners of Apple's iPhone, iPad, and iPod Touch can successfully jailbreak their devices without the need for a computer. According to the dev team, Absinthe 2.0 is the "fastest and easiest" jailbreak method for iOS devices yet. Have at it.

RIM Won't License BBM, After All: Earlier this year, Research In Motion leadership suggested that the company might license its BlackBerry Messenger service to other platforms. It now appears that idea is off the tablet. According to a report from The Wall Street Journal, CEO Thorsten Heins put the kibosh on the notion, and wants the company to instead focus on delivering BlackBerry 10 on time. Oh well.

Sprint Sneaks HTC EVO 4G LTE Through Customs: OK, Sprint didn't really sneak them through, the smartphones in question actually passed a U.S. ITC-mandated examination for compliance with an exclusion order. The smartphones were supposed to go on sale May 18, but got stuck in customs thanks to a patent ruling. Sprint confirmed earlier this week that it would begin delivering some of the pre-ordered smartphones by May 24, though a still launch is yet to take place.

Bump Lets Smartphone Users "Bump" Pix Directly To Their Computer: Bump is a smartphone app that lets people transfer contact and other information from handset to handset by "bumping" them together. Now, Bump is letting Bump users "bump" the photos on their handset directly to their PC, sort of. The transfer actually goes from the smartphone to the user's Bump account in the browser, not the PC's hard drive. Once the photos appear in the browser, PC users can download them to and store them on their computer. Still, neat idea.

HP's Enyo Team Defects to Google: Enyo is the internal project at HP that is responsible for what's left of webOS. The Enyo team has been converting webOS from a proprietary operating system to open source code. Though HP remains committed to delivering the full webOS code to the open source community, it just lost the people responsible for 99% of the code. It's not clear yet what the team will do at Google, though settling in with the Android and/or Motorola projects makes sense.

Nvidia Brags of 30 Tegra 3 Device by Year's End: According to Nvidia's general manager Mike Rayfield, there will be no fewer than 30 devices using the Tegra 3 processor available by the end of the year. The Tegra 3 is a quad-core processor that has a fifth assistant core for power management. It's a solid processor that performs well in devices such as the HTC One X. Tegra 3 processors have incredible computing power and still manage to deliver solid battery life. Too bad Rayfield didn't provide any details about the devices in question.

Google+ for Android Totally Rewritten: A couple of weeks ago, Google outed a new version of the mobile Google+ app for the iPhone. It is a gorgeous rewrite of the app that's much more visually appealing. Well, this week the Android version caught up to the iPhone version. Google+ for Android is now live in the market and adds some cool features, such as being able to edit posts after they are live, and start hangouts from the phone. It also lets users download photos more easily, and boosts the Google+ Messenger functionality.