2012 Will Be the Year of the Android Tablet

In Vegas in January the industry will take to go all in with tablets running Android 4 ("Ice Cream Sandwich"). Quality and features will go up, prices will go down.
Larry Seltzer
Contributor
December 23, 2011

At the end of 2011 the tablet market is overwhelmingly an iPad market. There are some Android tablets, but they're mostly either highly customized like the Amazon Fire or Barnes and Noble Nook Color, or cheap pieces of garbage without even a capacitive display. The Samsung Galaxy Tab is one clear exception to the rule.

This will all change in 2012. At CES in Las Vegas the second week of January I expect to be able to walk from one side of the Las Vegas Convention Center to the other stepping only on Android tablets. The place will be full of them.

The reason is Android 4.0, a.k.a. Ice Cream Sandwich (ICS), which is out in source code from Google and in hacked ROM form from CyanogenMod. Before too long we'll start seeing phones and tablets shipping with real, supported versions of it. It's an impressive piece of software which establishes a very high baseline for the next generation of Android devices.

By the end of the year Apple's enormous market share advantage will be in a precipitous dwindle. They'll still be selling a lot of iPads and who knows how compelling the iPad 3 will be, but consumers and businesses will have many reasonable alternatives. The biggest advantage for Android over iOS is that there is only one company making iOS phones and tablets, and they don't make a lot of models. There are many companies making Android devices and the magic of competition will force them to drive prices down and quality up. 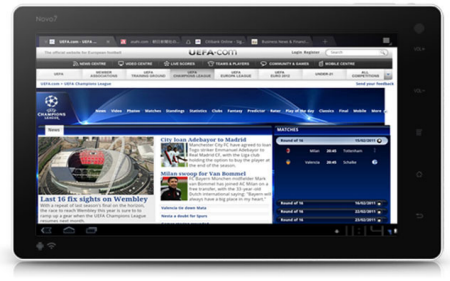 We've been seeing it all year in the smart phone market. All the really hot hardware goes into Android phones. Most of the rapid advancement goes in it too. This is partly because of competition from hardware companies and partly from Android being an open source project.

If there's a dark side to the open Android model it's security. Without a bouncer at the door, like Apple with iOS, anyone can and does get into the party. It's not a real-world problem yet for Android users, at least those with a little horse sense, but clearly criminals are trying to establish a presence in the Android world.

I think that when it all shakes out businesses will be able to keep threats under control for devices they manage. It's certainly easier to write security software for Android than for iOS where Apple may not even let you write it, and things are not so bad on iOS.

The other part of this issue that makes me bullish on Android is more related to phones. I don't have numbers, but carriers must make more money on Android phones than on iPhones. They therefore have a greater incentive to push Android than Apple. Some of this issue probably spills over to the tablet market in the sense that tablet companies will be able to undercut Apple and allow greater margins for retailers, but it's not exactly the same. With phones, the carriers pretty much dictate the design and features of the phone to the manufacturer. Except with Apple, which is another reason carriers like Android.

By this time in 2012 you should not be surprised to see the tablet market at least 1/3 Android, maybe more. There's also the possibility that Windows 8 and tablets running it will be available at that time. It's all good for you, the buyer.