The FreedomPop case for the iPod Touch gives it 4G connectivity and the company provides a free plan. Add a VoIP service like Skype and you've got the equivalent of an iPhone. The case is actually a mobile Wi-Fi hotspot that supports up to eight other devices.
Jacob Lopez
Contributor
July 31, 2012

Soon, 4G connectivity from your iPod Touch will be possible with a new case called FreedomPop. The company claims its product turns Apple's portable device into an iPhone, but ditches the contract. FreedomPop provides the free 4G service. BYTE spoke with FreedomPop VP of product Mauricio Sastre to find out just how it will offer 4G data connectivity to iPod Touch users for free. 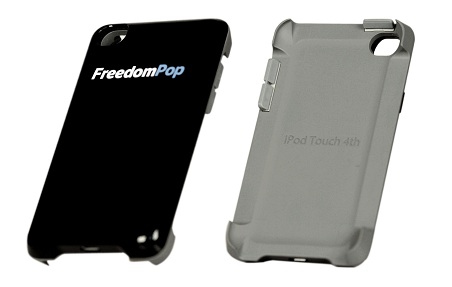 The plan would be similar to that of Dropbox or Skype in the sense that the company hopes power users will help subsidize the cost of providing free service to casual users. Users will be guaranteed 500MB free, and could earn additional megabytes, up to a gigabyte. Going over that would result in an overage fee. The company also plans an earned economy, similar to a Facebook game in which users gain credit for certain actions, such as adding friends to their network.

FreedomPop will have three revenue streams. The first is the cost of the case itself, which will cost $99. The second will be value-added "freemium" services. These work by offering the initial service free, but giving users additional options à la carte. For now, Sastre said he couldn't reveal exactly what those add-ons would be.

Finally, there are the overage charges for users over their data limit. The details for these charges are still being worked out, but FreedomPop plans to charge roughly $10 a month per GB.

The service will be available in 40 major markets to about 130 million people, according to Sastre. "It echoes the coverage of Clearwire's network," said Sastre. (Click here for a list of markets supported.)

When asked if he consider carriers such as AT&T, Sprint, and Verizon to be competition, Sastre said, "In some cases more so than others. For example, with Sprint--we just signed a big deal with Sprint--and they are going to be our LTE provider, so we look at them as a partner, and we look at ourselves as a retail channel for Sprint. That's not an adversarial, or a directly competitive relationship."

However, he adds that customers may choose their data plan rather than pick up a Sprint handset, and in that sense it can be competitive. He considers Verizon and AT&T direct competition.

Although FreedomPop plans to launch on Clearwire's data network, it ultimately willl transition to Sprint's LTE network as the network goes fully online.

The sleeve itself does not have any direct impact on the iPod Touch's battery life. It would be the equivalent of using the device in your home Wi-Fi network, according to Sastre. Essentially, the device is a mobile hotspot that your iPod Touch is housed in.

FreedomPop will hit the market sometime in the next two months, said Stastre. It will begin with a 60-day soft launch during which kinks will be worked out, then proceed to a full launch. It will work with third- and fourth-generation iPod Touch models, but up to eight other Wi-Fi-capable devices can be used through the mobile hotspot.