Will buyers and other smart phone makers be in trouble for infringing? There might be prior art.
Larry Seltzer
Contributor
December 21, 2011

Apple has received US patent #8,082,523 for a mobile phone with a touch screen and GUI which allows the user to invoke other apps while a phone call continues. Here's the abstract:

At first this would seem to be a big problem for other players in the smart phone market, as they all now allow users to run other apps while a phone call is in progress. Experts believe there might be prior art, depending on how precisely the patent is to be construed.

There are many examples of earlier smartphones, including BlackBerry and Palm Treo phones, that allowed this function. But these were not touch screen phones. In the abstract above and in the more detailed list of Claims, the patent speaks largely of user interface and finger gestures. The patent only claims certain methods of invoking an application while a phone call is in progress. Apple filed the patent application on Jan. 6, 2008.

Other smart phones would seem to violate the Apple patent, narrow as it might be. But Apple has many user interface patents related to various gestures. 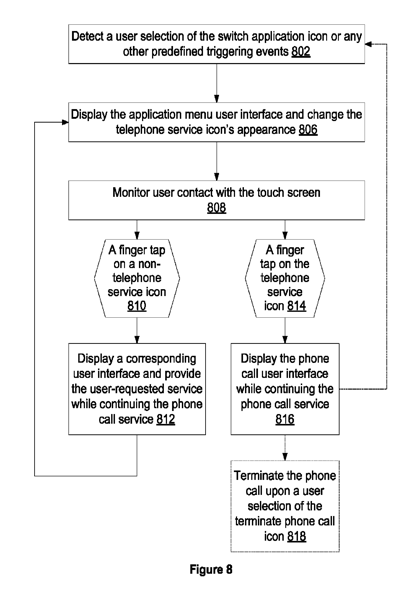 The Apple patent in flowchart form.

So it's not clear whether a prior art argument would work. "The other big question is whether this patent is obvious. When something is 'obvious,' it is not patentable, but it is difficult to make a clear-cut definition of obvious," Deborah Sweeney, CEO of MyCorporation.com, told BYTE in an email interview.

How did we get to a situation where such things are patentable? The US Patent and Trademark Office (USPTO) has been issuing a flood of such patents for years, making it difficult for software developers to know what is and isn't off limits. Says Sweeney, "...this patent may be considered by many to be weak and calls into question whether the USPTO is monetarily motivated to issue patents."