Apple CEO said a lot without saying too much when AllThingsD grilled him Tuesday night.
Eric Zeman
Contributor
May 30, 2012 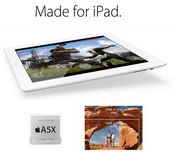 10 Gorgeous Apps For New iPad
(click image for larger view and forslideshow)
Anyone who wants a feel for how Apple CEO Tim Cook is running the company sure got an earful at an interview with AllThingsD's Walt Mossberg and Kara Swisher Tuesday night. The Q&A took place at an event in California, and Cook said a lot without saying too much.

The topics covered during the interview ranged from the iPad and convergence to internal changes regarding how Apple treats its own workers, Siri, the AppleTV, and of course, Steve Jobs. Here are some of the best back-and-forths of the event.

Walt: So, the public at large will be exposed to a different approach to this from your friends in Redmond. They see tablets as a continuum; there will be laptops and tablets, convertibles, all running the same thing. Why doesn't that work for you?

Tim: The tablet is different. It can do things that aren't encumbered by what the PC was. We didn't invent the tablet market, we invented the modern tablet... I love convergence, I think it's great in many areas. But products are about tradeoffs, you have to choose. The more you look at a tablet as a PC, the more the baggage from the past affects the product.

Walt: How is Apple different with you as the CEO so far?

Tim: Steve taught us to look forward, to not look at the past. When I say things aren't going to change, I'm talking about the culture of Apple. You can't replicate it. You can't get a consultant report and replicate it. It's something in our DNA. Steve told me, when we talked about being CEO, he said "I saw what happened at Disney," that people would all sit around and say "What would Walt [Disney] have done?" And he looked at me with those intense eyes, and he told me to never do that. Just do what's right. And I'm doing that. Does that mean that something will be different? Of course.

Kara: Assess the China situation. You have many critics, very valid critics. Why isn't there an Apple factory in China, run by Apple?

Tim: There's a lot of questions in there. Why don't we have [a factory]? We looked at things we can do, and what people could do better. And we looked at that and thought someone else could do it better. The operational stuff, that's all Apple. But we looked at manufacturing and believed someone else could do it better. But we've taken a position on overtime--some people want to work more, to bring home more money to their families--and we're really enforcing this. We're micromanaging that. We're doing it in a way, we're showing a level of care that I don't see in other places. This is an area where I hope people rip us off wildly.

Kara: So let's talk about patents. Are the wars a problem for innovation?

Tim: Well it's a pain in the [rear]. It's important that Apple not be the developer for the world. We can't take all of our energy, and all of our care, and finish the painting and have someone else put their name on it. The worst thing in the world that can happen to you, is if you're an engineer and you've given your life to something, is to have someone rip it off. We just want people to develop their own stuff, and not rip us off.

Walt: But people say you rip them off.

Tim: If you look at most of those, those are on standards-essential patents. Those carry a responsibility of the owner to license those. Something like, to connect to a 3G network. So the issue with the system relative to this is that this is an economic argument. No one should be able to get an injunction off a standards-essential patent. The owner has to license it. So when someone comes to you and tries to get some obscene amount of money from you, they're saying they want to go get an injunction, they're using it.

Kara: How do you look at the competitive landscape?

Tim: I think we have the best phone. You have two OSes that make up the vast majority ... it's iOS and Android. You have Windows Mobile now beginning to ship and we'll see how they do. And you have RIM that is still serving some large number of enterprise customers. But the momentum right now is in the first two. Will that change? I think that anything can change. The smartphone revolution is still in the early stages. When you look at this, it's a billion-unit market in three years from now. And a few years after that, I'm not sure you'll see any phones that aren't smartphones.

Kara: Let's talk about TV. How are you looking to change TV?

Tim: You know, very uncharacteristic of us, we've stayed in the Apple TV product. We're not a hobby kind of company, as you know. Our tendency is to do very few things. And, if something creeps in and isn't a big success, we get it out of the way and put our energies on something else. Apple TV though, you see what we've done. We've stuck in this. It's not a fifth leg of the stool. It's not the same size as the phone or Mac or tablet business. But last year we sold a little less than 3 million Apple TVs.

Walt: You bought Siri. It's in your ads, and it's the defining feature of the [iPhone] 4S. When it works, it's magic. But a lot of time it doesn't work. It's a beta. What's going on with that? Is it up to your standards?

Tim: Customers love it. It's one of the most popular features of the 4S. But there's more that it can do, and we have a lot of people working on it. And I think you'll be really pleased with some of the things coming over the coming months. The breadth of it. We have a lot that Siri can do. People have dreamed of this for years, and it's here. Yes it could be broader, but Siri as a feature has moved into the mainstream. So I think you're going to be really happy with where it's going. We're doubling down on it.

[Transcript provided by The Verge.]

Employees and their browsers might be the weak link in your security plan. The new, all-digital Endpoint Insecurity Dark Reading supplement shows how to strengthen them. (Free registration required.)