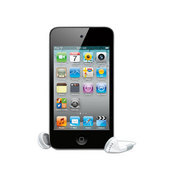 Jobs showed off the latest version of the iPod touch, which is the highest-end product in the franchise. The latest edition of the device includes a number of features borrowed from the iPhone 4, including Retina Display, FaceTime video conferencing, and the iOS 4.1 operating system.

"We've put our most advanced technology inside the new iPod touch," said Jobs. "Whether you're listening to music, playing games, making FaceTime video calls, browsing the Web, capturing HD video or watching TV shows and movies, the new iPod touch with its Retina display, A4 chip, and 3-axis gyro is more fun than ever," said Jobs.

To the iPod shuffle, Apple has added a VoiceOver button which, when pressed, lets users hear the name of the song that's currently playing. It also alerts users to a low battery. The VoiceOver feature is available in 25 languages. Meanwhile, new clickable buttons let users more easily play, pause, and fast-forward their music.

Apple has also improved iPod shuffle's battery life, extending it by up to 50%. That means more than 15 hours of playback on a single charge, according to the company.

"We're making the iPod shuffle even better by combining clickable buttons and VoiceOver technology, so users can find and enjoy their music without ever looking at their iPod shuffle," said Jobs. The new, fourth-generation iPod shuffle is available next week, starting at $49 for the 2GB model—available in silver, blue, green, orange, or pink.

Finally, at least in terms of the iPod makeovers, the iPod nano has been completely redesigned. The new version is almost half the size and weight of the previous version, and new touch controls let users navigate through their playlist simply by tapping or swiping the screen with a finger. It also features a sleek, aluminum and glass casing with a built-in clip.

"This is the biggest reinvention of the iPod nano since its debut in 2005, and we think users are going to love it," said Jobs. Availability starts next week, with prices beginning at $149 for the 8GB model, and $179 for the 16GB model.

Apple's Wednesday announcements weren't limited to the iPod. The company has long sought to be a player in the market for settop-based entertainment devices, but to date its Apple TV offering has largely failed to catch on.

Jobs said new deals Apple has struck with major networks and studios will change that. Apple will make TV shows from ABC, Fox, Disney Channel, and BBC America available for download via the Apple TV console for just 99 cents per episode.

Apple also said a new version of the Apple TV box will be available later in September for just $99. "This tiny, silent box costing just $99 lets users watch thousands of HD movies and TV shows, and makes all of their music, photos, and videos effortlessly available on their home entertainment system," said Jobs.

Investors warmed to the new offerings, as Apple shares were up 2.85%, to $250.03, in late afternoon trading Wednesday.