Gates urges conference participants to apply their "commitment and creativity" to make sure education technologies such as analytics live up to promise.
David F Carr
Editor, InformationWeek Government/Healthcare
March 07, 2013

Educational 'Technology' Across the Ages
(click image for larger view and for slideshow)
Closing out a week of enthusiasm and energy at SXSWedu, Bill Gates reminded the crowd that what's happening now echoes a surge of enthusiasm from the late 1990s, when the Web seemed to be opening limitless frontiers for education -- and then the bubble popped.

"We have to check ourselves and ask, is it really different this time?" Gates said in the closing keynote of SXSWedu, the education-focused event associated with the South by Southwest conference in Austin, Texas. There are reasons to think this time is different, including more mature technologies and favorable economics, he said. For example, in the late 1990s storing an hour of video to be served over the Internet cost about $400 versus about two cents today.

Still, innovators need to prove that they can translate that potential into making a real difference for education, Gates said. "A lot hangs in the balance. We're counting on the commitment and the creativity of this group."

[ To find out how colleges are taming costs and anticipating class sizes, see To Avoid Nasty Surprises, Higher Ed Turns To Prediction.]

Gates, the co-founder and former CEO of Microsoft, was appearing in his role as co-chair of the Bill and Melinda Gates Foundation, which supports education reform efforts in the U.S. and public health initiatives worldwide. Gates recently has been promoting the potential of analytics to solve global problems, including the problems faced by educators.

"We try not to be naive about how complex it's going to be" to make all the pieces of the educational technology puzzle fit together, Gates said at the outset. Yet educators and policy makers are getting closer to agreeing on their ultimate goals, he said. "The idea that these online platforms can target a clear standard is incredibly powerful," he noted. However, his slide making this point generated a wave of laughter from the locals because it showed a map of the 45 states that have joined the Common Core State Standards Initiative, with Texas standing out as one of the big missing pieces in the center of the puzzle.

Education data integration has "gone from being an almost impossible problem" to merely a challenging one, Gates said.

Along with the Carnegie Corporation of New York, the Gates foundation has provided funding for InBloom, a non-profit educational technology venture focused on data integration that was highly visible at SXSWedu, hosting one of the major evening events as well as a series of seminars on the use of its technology. InBloom is not creating data standards but hopes to "operationalize" those that already exist by storing student data in a common format so that it can be made available to multiple applications that today are not integrated, with a single sign-on capability so teachers don't have to remember dozens of passwords.

Joining Gates on stage, InBloom CEO Iwan Streichenberger said such data integration "plumbing" is "not very exciting but it's extremely important" for making data more available to teachers and useful in the classroom.

Gates also recognized one particular adaptive learning startup, DreamBox Learning Inc., giving CEO Jessie Woolley-Wilson an opportunity to explain how her software accelerates math education by identifying "millions of learning paths," based on "continuous real-time data" from performance on assessments that are designed to feel more like playing a game. Although DreamBox is not a gaming company, it uses gamification strategies to keep children engaged, she said. "If kids persist, then they can progress."

A third guest, Summit Schools CEO Diane Tavenner, talked about the role charter schools can play as "incubators of innovation" that should be shared broadly with all educators.

One of the best technologies her school has adopted recently is a program called ShowEvidence, which provides tools for evaluating assignments such as essays, allowing the instructor to tag sections of the text to determine whether the student met goals such as providing a clear thesis statement followed by evidence and a conclusion.

The teacher can even record voice or video notes as another type of feedback. The tool adds structure to the process of grading work that doesn't fit into the multiple-choice mode of automated assessment and makes it easier to document the rationale behind a grade. "So many fewer red pens are going to die as a result of this platform," Tavenner said.

Gates said he is delighted by the energy and money being focused on improving education, but thinks it's still not enough. Given that education is where "any improvement you make benefits every other sector of the economy," there should be more money invested in researching what makes the best teachers more effective than the rest, he said. 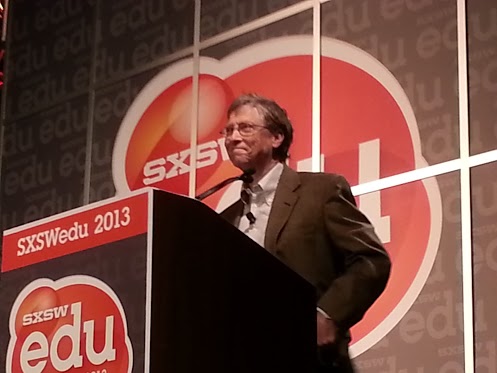