BlackBerry, the company now formerly known as RIM (Research In Motion), formally announced the new BlackBerry 10 platform today along with two phones to run it. The software on these phones is radically different from the old BlackBerry OS and from existing smartphone operating systems. But many important details - technical specs like battery life and availability in the US - are still missing or unclear.
Larry Seltzer
Contributor
January 30, 2013

BlackBerry 10 is a radically-different platform, totally unlike the earlier BlackBerry versions and quite unlike anything else on the market. Many details of BlackBerry 10 are still missing, but they should emerge soon.

Research In Motion President and CEO Thorsten Heins began today's BlackBerry 10 rollout event in New York City by announcing the change of the company's name to BlackBerry, giving the company just one well-known brand. The BlackBerry brand and image received considerable dressing up today, as the company also announced that singer/songwriter Alicia Keys will be the company's new Global Creative Director, working with product teams and users.

The company revealed two phones today: the Z10, a full touch-screen model, and the Q10, which includes the famous BlackBerry physical QWERTY keyboard.

Availability of the phones is a complicated matter. The Z10 will be available in the UK tomorrow (January 31), in Canada on February 5, and in the US in March. AT&T, Sprint, T-Mobile and Verizon will carry BlackBerry 10, but it appears, based on their announcements, that not all will carry the Q10.

The BlackBerry 10 platform is built on the QNX real-time operating system and completely new upper software layers. The poorly-regarded BlackBerry Web browser is replaced by a modern program built, as are Google's Chrome and Apple's Safari, on the WebKit browser engine.

The user interface on BlackBerry 10 is heavily gesture-based. It is designed to allow you to move within and between applications using only gestures, such as a swipe down from the side, with your thumb. Gestures allow users to quickly switch between applications without going through a home screen, a feature they call BlackBerry Flow. Users can "peek" at an application, partially displaying it over another, without leaving the first.

In a formal approach to the problems of BYOD support in companies, BlackBerry 10 has separate Personal and Work profiles. IT can manage applications and data in the work profile, denying them to users without access, and separating that profile from any effects of applications in the personal profile. Many third party products attempt to create such a distinction in current mobile operating systems, but BlackBerry is the first to build it in.

The BlackBerry Hub is a unified inbox that consolidates communications including e-mail, texting, BBM (BlackBerry Messenger), Facebook, Twitter and LinkedIn. The Hub also consolidates a historical timeline of communications with your contacts on all these services. The calendar is also integrated into the hub and accessible from it with a single gesture. 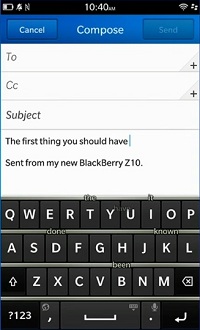 "Flick" predicted words from the keyboard to the document. (Click image for larger version.)
BlackBerry is famous for its keyboard, and the company has created a soft keyboard for the Z10 that they claim lives up to BlackBerry standards. As you type, the system estimates words that you may be typing and places them on the keyboard. You can then select them by "flicking" them.

BlackBerry 10 also has built-in multi-language support. In the demos, the mail client recognized English, French, and German typed into the same message.

BlackBerry Remember is a place you can store items of any media type that need attention, from emails to songs. It could serve, for instance, as a to-do list. Remember can have many folders with different collections. Support for Outlook and Evernote are also baked in to Remember.

Another new application is Story Maker. Users can take different kinds of content, including images, music and video, put them in a collection, assign titles and credits, and Story Maker creates a presentation of them automatically which you can share.

While the company described and demonstrated the software in detail today, very little was said about the hardware in the two devices. According to AT&T's Z10 page, that phone has a 4.2 inch display, 1.5 GHz dual-core CPU, front and rear cameras with 720p HD video capture and Bluetooth 4.0. One slide in the rollout said the display had 356 ppi. But that's it. There is no information yet, for example, on the amount of storage or RAM in the devices nor in battery life.

The official retail price of the Z10 from RIM is $149.99 with a thee year contract, but in the US the price will be determined by carriers. Of the US carriers, only AT&T says in its announcement that it will carry both the Z10 and Q10, but no pricing or availability date were provided. Verizon Wireless says it will carry the Z10 for $199.99 with a two year contract, and that only they will offer the white Z10. Sprint says that they will offer the Q10 "later this year," and T-Mobile announces BlackBerry Z10 support, but no pricing or availability.

At launch time, BlackBerry World, the company's onlne store, has over 70,000 applications. The company claims this is, by far, the largest number of apps available for any first-generation mobile operating system at launch, and that thousands of new applications will be added each week. They listed many big names that are either available or committed to support, including Skype, Kindle, and Webex.