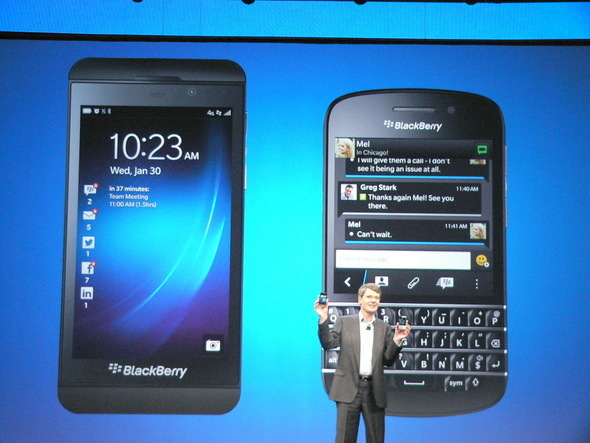 The company formerly known as Research In Motion launched a redesigned operating system, two all-new smartphones and a "reinvented" company on January 30, and it marked the occasion by renaming itself after its product: BlackBerry. The new operating system, BlackBerry 10, and the new devices, the BlackBerry Z10 and Q10 (seen above, introduced by BlackBerry President and CEO, Thorsten Heins), are what analysts and industry watchers are calling the company's last, best hope of reviving a once-dominant mobile business.

Delayed by more than a year, BlackBerry 10 promises consumers an intuitive, gesture-driven navigational experience and a rich selection of content including music, video and apps from the BlackBerry World ecosystem. The question is whether consumers will take to the new BlackBerry 10 smartphones even as corporate bring-your-own-device policies are encouraging freedom of choice. The new phones won't be available to U.S. customers until March or April, depending on the model.

The key highlights of the operating system include a BlackBerry Hub that aggregates communication modes including email, social networks and BlackBerry Messenger texting. Messenger adds a Video Chat feature akin to Apple's Facetime feature but that also includes a screen-sharing mode, so users can share their mobile interfaces with others during a meeting. BlackBerry is promising more than 70,000 apps as well as video from eight major studios and music from "all" leading record labels at launch.

The BlackBerry Z10 is clearly designed to attract would-be iPhone or Android buyers. It's a fully touch-screen controlled model with a 4.2-inch, 1280 x 768 screen with 356 pixels per inch. The life of the removable batter is 10 hours of talk time and 305 hours on standby. BlackBerry announced February availability in Canada at $149 with a three-year contract. AT&T, Sprint, T-Mobile and Verizon will all offer the Z10 in the U.S., probably in March, and Verizon has said it will charge $200 with a two-year contract.

The Q10 is a hybrid model with a 3.1-inch, 720 x 720 pixel screen and physical QWERTY keyboard aimed at traditional BlackBerry users. It will be available in the U.S. in April. Pricing was not disclosed.

For the corporate realm, where RIM has its deepest support, the BlackBerry Enterprise Service 10 (BES 10), released January 24, delivers state-of-the-art security upgrades and a new BlackBerry Balance feature that segregates corporate and personal content on employee devices. Balance lets administrators control content and apps on the corporate side of the phone while letting users maintain control and have privacy within a personal space. If an employee parts ways with a company, admins can wipe corporate content and apps without deleting personal content. BES 10 also lets administrators manage Android and iOS devices from the same console -- a capability RIM first delivered in last year's BlackBerry Fusion release.

The company's challenges with BlackBerry 10 are huge. The company still has a huge base of some 80 million users, but its share of new smartphone sales dropped to just 4.6% in 2012, according to IDC. At first look, the new devices offer solid specs and a few novel features, but RIM has two major forces working again it, according to Jan Dawson, chief telecoms analyst at Ovum. "Companies are no longer buying the majority of smartphones sold today, and individuals overwhelmingly choose devices other than BlackBerries when they make buying decisions," Dawson said in a research note.