In a move that undercuts Amazon's Kindle by $9, the bookseller plans a $20 reduction in the price of its electronic reader, lowering the cost to $130.
Antone Gonsalves
Contributor
September 01, 2010 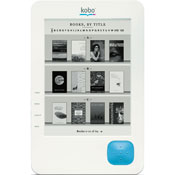 (click image for larger view)
Borders Kobo eReader
Borders has cut the price of its Kobe electronic reader, joining rivals in trying to lure customers with inexpensive hardware to buy and read digital books. Starting Wednesday, the bookseller plans to lower the price of the Kobo e-reader $20 to $130. In addition, Borders, which sells other manufacturers' e-readers, will start offering the Aluratek Libre for $100, instead of the current $120.

The Kobo is built by Kobo Inc., in which Borders has a stake. The bookseller's latest price takes the Kobo to $9 less than Amazon.com's least expensive Kindle, which is believed to be the most popular device dedicated solely to reading digital content. However, the Kobo has no Wi-Fi or 3G wireless connections, a convenience offered in the Kindle, as well as Barnes & Noble's Nook and Sony's Reader.

In selling the Aluratek at $100, Borders and its supplier are taking the device into a price range where analysts say it could become an impulse buy for consumers. In general, when products fall below $100, then many consumers are willing to spend the money to try out the product.

"This is a significant inflection point in terms of market penetration of the Kobo and Aluratek e-readers," Mike Edwards, chief executive of Borders, said in a statement. "We envision this price reduction, enabling the purchase of these devices as a second e-reader in a household, as a more affordable option -- the list goes on."

Borders has adopted what it calls a "device agnostic philosophy" to e-readers. While offering the Kobo, the company is also selling a variety of devices from competitors.

Borders on Tuesday said it would carry Velocity Micro's Cruz Reader R101 and Cruz Tablet T103, both running on Google's Android operating system. The bookseller is taking pre-orders for the devices, which will sell for $200 and $300, respectively. The Cruz reader is scheduled to be available Sept. 30 and the Cruz Tablet on Oct. 15. Both Cruz models have 7-inch color touch screens and Wi-Fi wireless support for browsing the Web. The devices also can play music and video.

Prices for e-readers in general have been dropping. Amazon.com and Barnes & Noble slashed prices for their respective devices in June. Driving the price cuts is increasing competition in the e-reader market, which now includes the emerging category of tablet-style computers, such as Apple's iPad. While these devices are more expensive than e-readers, they also have many of the same functionality as a laptop. Apple has sold more than 3 million iPads since its release in early April. Other major computer makers planning to release tablets this year include Dell and Hewlett-Packard. Dell's Streak tablet is set to start shipping Sept. 1.