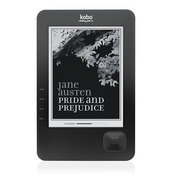 The Kobo e-reader, which had sold for $130 without Wi-Fi, was available as of Wednesday for pre-order for $140 on Borders' website and for $139 on Kobo's site. The new e-reader is scheduled to start shipping next month.

The latest release brings the Kobo on par with Amazon's Wi-Fi-only version of the Kindle, which sells for $139. Both e-readers have the same high contrast, E Ink digital paper display that is readable even in direct sunlight.

However, one major difference remains, which is in the support of document formats. While Amazon continues to uses its own proprietary format for e-books, Kobo supports ePub, an open standard developed by the International Digital Publishing Forum. Members of the forum include HarpersCollins, McGraw-Hill and Random House.

Having ePub support makes available the half-million free, non-copyrighted library books available through Google. More than 2.2 million books are available for the Kobo online versus 700,000 for the Kindle. The Kobo e-reader comes with 100 free books that include fiction, memoirs, politics and philosophy.

Borders, which owns a stake in Kobo, Barnes & Noble, which offers the Nook, and Amazon have been slashing prices on their respective e-readers for months in order to get the devices in the hands of avid readers. Analysts believe the booksellers are willing to sacrifice higher profits on e-readers in order to sell more e-books. Borders also sells e-readers from other manufacturers, including Velocity Micro, Aluratek and Sony.

Sony, whose core businesses do not include selling books, is one e-reader maker who has refused to drop prices. In fact, the company introduced this month a new generation of e-readers that are more expensive than the previous versions. The consumer electronics company has said it's more interested in competing on hardware quality than price.