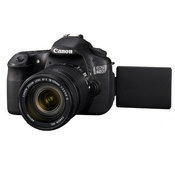 The new EOS 60D unveiled Thursday is the successor to Canon's EOS 50D. The latest offering's new features include a 3-inch diagonal LCD screen that swings out to the side and can be adjusted to a variety of angles for viewing when shooting.

The EOS 60D is designed primarily for the advanced amateur. "The EOS 60D has been designed to offer the image-capture and the full HD video features customers are looking for as they continue to expand their photographic skills," Yuichi Ishizuka, executive VP and general manager of Canon's consumer imaging group, said in a statement.

The new "vari-angle" Clear View LCD is particularly helpful when composing low-angle and overhead shots, whether still images or video clips, Canon said. The EOS 60D is the first camera in the EOS line to get the adjustable screen.

Another first for the EOS 60D is combining a multi-controller and a set button in the same dial on the back of the camera. The layout streamlines camera navigation for vertical and horizontal shooting, according to Canon. In addition, the company has added a locking-mode dial on the back to prevent inadvertent changes in a photographer's selected shooting mode.

Other specs for the EOS 60D include an 18-megapixel image sensor, a nine-point auto-focus system, and the ability to shoot HD still images up to 5.3-frames per second. The camera supports SC, SDHC, or SDXC memory cards and has an ISO range from 100 to 6400, expandable to 12,800 for low-light conditions.

Canon released its latest DSLR camera three days after Sony launched two of its own, the Alpha SLT-A33 and Alpha SLT-A55V, which can also take still images and full HD video. The SLT-A33 is set to ship in September and the SLT-A55V in October. The cameras will cost $650 and $750, respectively, for the body only, and $750 and $850, respectively, for the body and 18-55mm zoom lens.

Last week, Nikon released a refresh of its entry-level DSLR camera, adding full HD video recording. The D3100 is scheduled to be available in mid-September. The camera includes an AF-S Nikkor 18-55mm lens and is expected to cost $699.95.