NetClick simplifies the creation of interactive presentations and lets students give feedback from a smartphone, tablet or laptop rather than a clicker.
David F Carr
Editor, InformationWeek Government/Healthcare
February 19, 2013
Will professors who doubt the utility of technology in the classroom be more enthusiastic about technology created by other professors?

That's the hope of the academic team behind NetClick, a startup that hopes to greatly simplify the process of creating interactive presentations. Co-founder Darren Abramson said when he read InformationWeek's recent story on professors' skepticism of technology at research universities, he understood immediately where that skepticism was coming from. In fact, he shared a draft of a paper he and his collaborators are working on, which references other studies on how the motivation of research university professors is to focus on research rather than new teaching techniques.

Besides, professors and teachers in general are busy people, reluctant to embrace technologies that could create more work for them, Abramson said. In some cases, the value of the technologies to improve instruction is also unproven. One classroom technology that studies have consistently shown to be effective is the use of simple clickers that allow students to give feedback on a multiple-choice prompt, allowing the instructor to assess whether they've understood the material. But because of the cost of the clickers and the logistics of deploying them, he said, most professors are aware of clickers but don't use them.

[ The gadgets are coming: Monocle Harnesses BYOD In Classrooms. ]

After more than a decade of teaching philosophy and cognitive science, Abramson met his co-founders while serving as a visiting professor in the University of Waterloo's computer-human interaction program. Their solution allows professors to import a PDF of any presentation, using a drag-and-drop upload mechanism that would be familiar to any Gmail user. Students can then access NetClick from a phone, tablet or laptop. When the professor projects the presentation in the classroom, it appears with a code across the top that students enter into the mobile app to access the presentation, synchronized as the professor advances through the slides.

The professor can get touchscreen or mouse-click feedback from the students on any slide in the deck. These votes, or answers, can be displayed as a "heat map" showing where the greatest number of students clicked. If the professor does just a little more preparation before class, using NetClick's tools to draw boxes defining the click area around the words or images on the slide representing each valid answer, the feedback can also be displayed as a pie chart showing how many students picked each choice. But even without that, the feedback is usable. 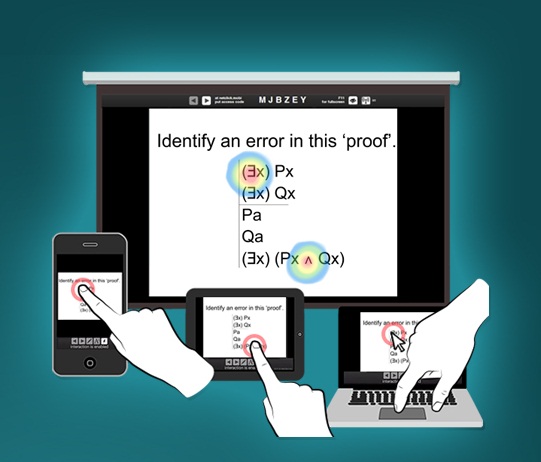 Abramson said the key to his approach is to allow professors to use any presentation and PowerPoint or any alternative tool that can output to PDF, opening up the possibilities of interactivity with a minimum of fuss. "They can give the same slides they were going to give anyway, and get this rich, visual interaction," he said.

The same technology is also available for use in elementary, middle or high schools that have bring-your-own-device policies or that provide students with classroom tablets or laptops.

Peter C. Cornillon, a professor of physical oceanography at the University of Rhode Island, experimented with using NetClick in two different ways in an introductory course last semester. First, as he got to the end of each slide, he would pause to ask students to click on anything that they didn't understand. The second technique, which proved to be more effective, was to ask students to give feedback to a simple statement like "I understand internal waves" by responding yes, no, or sort of.

"In one case, most of the students indicated that they did not understand a concept that I thought was the simplest of that lecture," Cornillon explained via email. "It quickly became clear to me that the reason for this was that I had not explained it. It was simple, but I still had to explain, albeit very briefly."

Cornillon had previously experimented with classroom interactive response using clickers from Turning Technologies and found the feedback useful. However, the trick was getting access to the hardware and making sure there were enough clickers to go around. With NetClick, he said, "all they need is a tablet, smart phone or computer. Almost everyone in the class had at least one of these, so all that I had to give them was the URL and code for the lecture and they were 'wired.'" Cornillon said he discovered the technology halfway through the semester and plans to expand his use of it next time he teaches the course.

Mohamad Elfakhani, a psychiatry resident at Western University in London, Ontario, said he found that using NetClick during lectures was effective partly because of the novelty, but also because it resulted in "people not falling asleep or engaged in own personal technology. It allowed me to inject some humor to the presentation as well, with options people could vote on."

NetClick is a software-as-a-service product, offered for $5 per student per semester, with price breaks for volume and longer commitments. The fee can be paid by either the student or by the professor, although Ontario recently passed a law against charging students additional fees for classroom technology. Often, a resourceful professor can find the money through a personal or departmental expense account for instructional technology, Abramson said. "There are usually pots of money at these institutions that can cover this."

Can data analysis keep students on track and improve college retention rates? Also in the premiere all-digital Analytics' Big Test issue of InformationWeek Education: Higher education is just as prone to tech-based disruption as other industries. (Free with registration.)