7 Ways To Create E-Portfolios
(click image for larger view)
Students and their professors say e-textbooks will be most valuable if they can lower textbook costs, but a pilot study by Internet2 and EDUCAUSE also found that delivery of electronic course materials must be streamlined.

The study included 23 colleges and universities and more than 5,000 students. It covered 393 courses, using McGraw-Hill Education e-texts and digital learning materials selected by faculty, as well as the Courseload reader and annotation software, which allows content to be delivered directly through their schools' existing learning management systems (LMS).

For the study, Internet2, the consortium that provides high-speed networking and other services to universities, teamed with EDUCAUSE, an association that represents the higher education technology community, particularly university and college CIOs. Pending a review of the pilot study results, Internet2 is considering introducing a NET+ E-Content program to distribute digital course materials in 2014. This is similar to the approach Internet2 has taken with cloud software products, aiming to lower costs and negotiate better terms by working on behalf of many universities.

"This study demonstrates that institutions and the marketplace must first remove barriers that exist even in today's paper textbook market, most notably cost," said Susan Grajek, EDUCAUSE VP for data, research and analytics, and the author of the report. If e-textbooks can deliver cost savings, students and faculty are interested, she said. More advanced features of e-textbooks for annotation and bookmarking comments, which might allow instructors to innovate around a text, intrigued study participants, but were not as important as more basic requirements.

"It struck me that what was going on here was very similar to Maslow's hierarchy of needs," Grajek said. "Until you've met a baseline set of needs, of which cost is the most basic, the ability for faculty to innovate doesn't matter." In addition to financial cost, some participants also cited the cost to the environment of paper textbooks as a factor that would drive them to use electronic texts, she said.

"Right above cost was the notion of availability. They want what they want, when they want it, where they want it -- at their home, in the workplace, anywhere they can read a paper book," Grajek said.

About 44% of instructors were supportive of the technology, 33% were critical and 22% had a neutral posture toward it.

The pilot project's structure was also a disincentive to some students who wanted the option of referring back to their textbooks after the course was over. 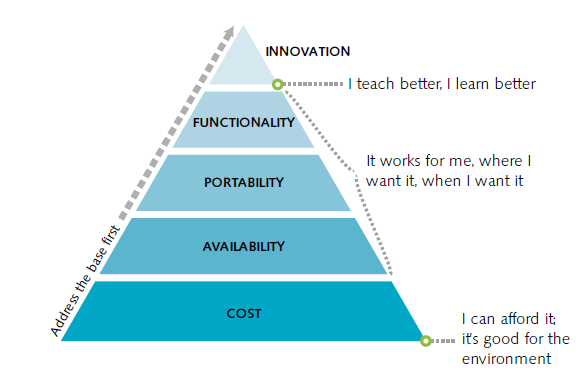 Also, the particular e-textbook format didn't support offline viewing. Delivering the texts over the Internet made it possible to monitor student study habits through the LMS, both for faculty analysis and for purposes of the study. However, it wasn't ideal for the students, who wanted to be able to access the content on their device of choice, at their convenience.

Students were interested in being able to view the content on their smartphones, although only about a quarter of them tried to do so, Grajek said. The content wasn't really designed for use on e-book readers such as Amazon's Kindle, she said. "You could do it on a tablet, but the laptop was probably the device ... that was ideal for portability and access" in the pilot.

On the other hand, offering e-textbooks for free was also part of the pilot project design, an attempt to offer an incentive for use of the technology, Grajek said. In a real-life scenario, at least some of the cost would probably be passed on to students, even if it wasn't a per-book cost.

As for studying and learning, 48% of students said they noticed no impact on the amount they read, while 16% said they read more and 37% said they read less in the e-textbook format. Most students (71%) thought e-textbooks were no better than traditional books at making difficult concepts understandable.

Participants also suggested they would be more interested in a program of this sort if it also included access to open educational resources, such as freely downloadable textbooks, whereas the study only included McGraw-Hill materials. "That's a recognition that textbooks are now part of a larger ecosystem of materials that can be used to teach and to learn, and we have to keep that in mind," Grajek said.

"The textbook and digital content marketplace is going through a transformation and the findings are consistent with our engagement with the leading e-content providers. Our collaborative efforts continue to shape the access to these tools to benefit students and faculty as we collectively move to new and innovative models in the production digital course material services," said Shelton Waggener, Internet2 senior VP, in a statement. "The pilot shows that campuses and providers must work together to address the fundamental differences in use of these new models, and must cooperate to support greater adoption and utilization of digital technologies critical to advance teaching and learning, and make these important resources affordable to students and families."