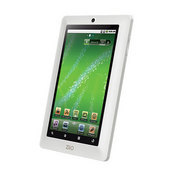 The Creative 7-inch tablet is being touted as different from "conventional tablets that offer mediocre sound." By touching an onscreen button, a user will launch the Pure Android Audio application, which offers Creative's X-Fi Crytalizer, X-Fi Expand, and apt-X audio enhancements, the company said.

The ZiiO devices run on Android 2.1 OS, and offer a touch screen, Bluetooth, and Wi-Fi 802.11 b/g connectivity, HD video output, a front-facing camera and a built-in microphone and speaker. Both are available with 8GB and 16GB of memory. The two ZiiO devices also come with an accelerometer, playtime of up to 25 hours (MP3) and up to five hours of video, a microSD card slot up to 32GB and a stylus.

"Pure Android Audio represents the most seamless high quality wireless audio streaming experience from an Android based device,'' according to Creative. "This is achieved with the unique Pure Android audio application (a one-touch onscreen icon housing X-Fi and Bluetooth connectivity interfaces), and a host of audio enhancement technologies that include the apt-X codec and lossless audio support."

Like other competitor tablets, the ZiiO devices let users connect to the internet, send emails, and shop for apps, games, and ebooks -- the ZiiO tablets can access apps from Creative's ZiiStore.

According to a Goldman Sachs, some 54.7 million tablet computers will ship in 2011, an increase of more than 500% over this year.

Other recent tablet announcements include ViewSonic, which said this week that it is now shipping its Android-based 7-inch device in the U.S. Last week, Sprint said it will introduce a tablet device in 2011.