Evernote is changing the way people keep track of their work. Here are a few best practices we gleaned from Evernote For Dummies.
Boonsri Dickinson
Associate Editor of BYTE
May 23, 2012

Evernote co-founder Phil Libin designed Evernote to act as a second brain, one that won't forget anything. At first glance, Evernote's barren interface looks almost too simple. Its charms are so subtle you might miss the fact that it can be anything you want it to be.

In the new Evernote For Dummies, David E. Y. Sarna gives tips on how to make Evernote work not only for personal documents but also for work. Its API has allowed developers to build around it and has opened up the number of applications that can help you be more productive. 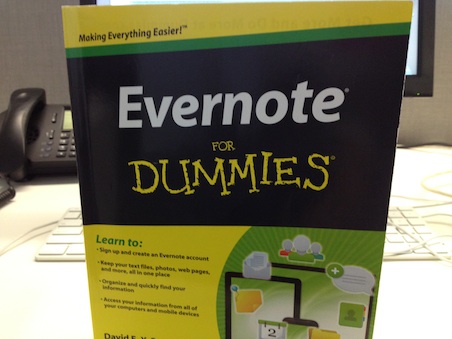 Creating notes is easy. It's a lot like sending an email. Each note can be kept in notebooks, so it's easier to find stuff later. But you can step up Evernote a notch and use it as your personal assistant. Here are some of Evernote's best features, which I learned about in the book.

-- Mobility. You can text your thoughts to Evernote or install the app on your phone so you can create notes on the go. Use your Evernote-generated email address if you're not logged in to Evernote. Record a photo, short video, or audio note, write text to go along with it, and send it to your Evernote account. You can share your notebooks with co-workers or friends.

-- Organization. One of Evernote's best features is tagging. Tagging helps group related notes and makes it easier to find information later without having to remember which notebook you saved it to. Here, from Dummies, are some best practices for tagging: tag related notes with the same tag, make sure the tags are short, and don't overtag. If you don't tag or tag wrong, don't worry: it's easy to just search on words across Evernote. Evernote treats your personal information like Google treats information on the Internet--you can usually find what you are looking for as long as you put in the right search words.

-- Encryption. You should encrypt your notes if you plan on storing sensitive data such as taxes or bank information. Simply highlight the text you want to encrypt, right click, and choose Encrypt Selected Text. Enter a password, verify it, and push OK. Be sure to keep your password in a safe place because Evernote doesn't store it.

-- Web Clipper. When using Evernote for research purposes, you might want to install the companion app Web Clipper, which lets you save websites you discover on the Internet. Go here to download Web Clipper. See the video below for a demo of Web Clipper used as a Chrome extension.

-- Third-party apps. Evernote enjoys a huge developer community that has built apps around it, helping you become more productive. For instance, WritePad for the iPad lets you take notes with your finger or iPad stylus pen and store them in Evernote. if you'd rather draw your ideas than write them down, there is PhatPad for the iPad, and Skitch, an app Evernote acquired last year. Other apps that stand out: ScanBizCards for snapping photos of business cards on your iOS or Android device; and Expensify, a Web app for managing your personal and business expenses.

Evernote has a few quirks. I've been using it on the Web and on my iPhone and sometimes it doesn't sync. To fix this, just click on the sync button to make sure the sync is complete. Also, you can't edit text on your phone until you click on the edit button. You can't create web clips in mobile browsers at all. An advantage of using the mobile version of Evernote is that if you save a note on your phone, it saves location information. I find this comes in handy when I'm taking photos of receipts and need to remember where I was at the time.

Once you start using Evernote to save stuff you don't want to forget, you'll begin to want to try out its advanced features and third-party apps. There are other ways to improve your productivity--by hooking up Evernote to your calendar, for instance, or by using apps to transcribe your voice notes into searchable text. To find out more, you might want to pick up Evernote For Dummies. As I learned in one morning, it doesn't take long to become familiar with some of Evernote's best features.