Feel The Heat, IT: Kindle Fire Is Here

Like any Android tablet, Amazon's new Kindle Fire is not to be trusted in a corporate environment. But just try to keep your users' hands off it.
Larry Seltzer
Contributor
September 28, 2011

Yesterday I semi-live-blogged Amazon's announcement of their new Kindle line, including its Android tablet, the Kindle Fire. There were delays because the Wi-fi in the room failed and panicked journalists mostly tried to file reports by texting on their cell phones. As annoyed as I was with all the technical problems, it was hard not to be impressed with what Amazon is promising and I said as much in the video below.

The new Kindle Touch and cheaper basic Kindle caught most of us off guard. We were waiting for the tablet. The Kindle Fire didn't disappoint, at least not as a demo. Not to diminish Amazon's product work, but all this is possible because of Android. It's allowing cheap devices to put pricing pressure on the premium brands, which of course means Apple. 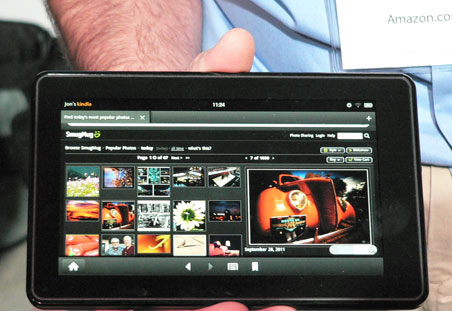 As an IT person you have reason to be wary of these devices. They're not just innocent little e-books and you should think before you allow them access, or at least unfettered access, to the network or even company PCs. In fact, if it wasn't clear enough to you from the beginning, all of these Amazon devices are purely consumer-focused and don't present any obvious business hook. They sure are sexy, though.


Just how sexy? See the image gallery that we posted over on InformationWeek.com

From IT's standpoint, the new Touch and other conventional Kindles are on the same level as a USB flash drive; they can be used to store programs and data that might or might not be desirable on the network. If you let users attach arbitrary USB devices, then a Kindle is no more or less threatening. (Of course, I would say that an attitude like this is potentially threatening.)

But the Kindle Fire is different. Like any Android tablet, it can run Android software and therefore has more worrying potential. By default, Android lets users opt out of the Google Store's "jail," but it might be that Amazon will lock you into a jail of its own. If that's the case, doubtless people will quickly come up with jailbreaks for the Fire as they have for the iPad. Amazon's Silk web browser is based on the WebKit rendering engine, which provides a steady stream of vulnerabilities to use for drive-by execution of malicious code, including jailbreaks.

In truth, Android devices in general aren't trustworthy enough to be given more than limited access to a company network. For example, unlike Blackberry and the iPhone, Android doesn't support IT policy-enforced device encryption. So lose your phone/tablet and whoever finds it can probably read everything on it.

We are still in the early days of tablets, but they're exciting days. I have a regular Kindle and I love it and want a Kindle Fire. I can't be alone.