Educational 'Technology' Across the Ages
(click image for larger view and for slideshow)
The overhead projector is being reincarnated as an iPad app.

The traditional overhead projector, a device for projecting lecture transparencies on a screen, has been gone from most classrooms for a while now, replaced by "document cameras" that meet the continuing need to occasionally project images from a book, magazine, map or drawing not already in a digital format. Despite the "document" name, these devices can also be handy for projecting other images, such as close-ups from a science experiment, onto a digital display.

Now one of the leading makers of classroom document cameras is getting the iPad bug. The TabCam, from AVer Information Inc., is a document camera, mounted on a flexible arm and made mobile with the addition of wireless networking and a rechargeable battery. While it can be used with a Mac or a PC, the exciting part of the product is its connection to an accompanying iPad app that allows an instructor to view and annotate the video from the camera, either projecting it live or recording it to share with students later.

"The difference is that both pieces are mobile," said Kris Rangarajan, marketing director at AVer. That means the camera can be used anywhere in the classroom. Students can use it to share video of something they are drawing at their desk or a chemistry experiment they are performing at the lab sink, and the teacher can interact with that video. The TabCam app supports fingertip drawing on the screen, allowing the instructor to circle images that deserve particular attention. There is also a blackboard function, allowing the instructor to draw or write messages on the iPad and have them displayed against a blank background.

The system is iPad-specific for now, although AVer plans to release an Android version later this year, Rangarajan said. "We wanted to tackle the iPad first. Getting the recording function, the live streaming of video and the annotations right was a pretty serious undertaking, and we wanted to accomplish that first." AVer also sees an opportunity in appealing to the many teachers and school systems that are deploying iPads en masse and need to find effective ways to use them.

AVer is primarily targeting iPad use in K-12 education.

In higher education, the use of iPads and other tablets is also seen as a major trend, perhaps spelling doom for devices like smart boards.

Product manager Jeanine Swatton, who has been teaching Ruby on Rails and Introduction to iOS Programming courses at the UCSC extension campus in Silicon Valley, said she absolutely finds the product useful in a university setting. However, Aver plans to focus most of its marketing on K12 schools, where it is better known. "We're already leaders in market share at the K-12 level, so that's a comfortable place for us to start with," Rangarajan said. 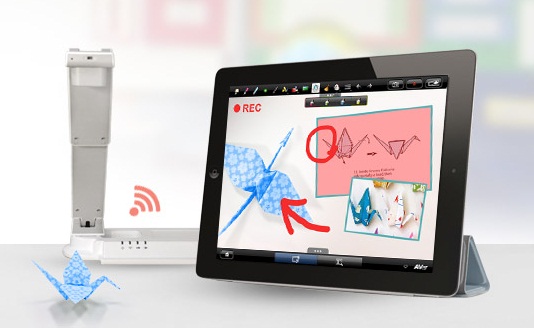 Flex-arm camera connects wirelessly to an iPad, with software for on-screen annotations.

Along with the TabCam, AVer announced another iPad-oriented product called the TabSync. TabSync is a portable, easy-to-use cart that can simultaneously sync, charge, transport and securely store up to 32 iPads in padded, numbered slots.

The AVer TabCam and TabSync will be available in April at $599.99 and $1,999.99, respectively, manufacturer's suggested retail price.