More cyber criminals are jumping on the mobile bandwagon, say reports from the RSA and the Government Accountability Office. As a result, companies who embrace the bring-your-own-device trend could be giving hackers access to corporate communications.
Boonsri Dickinson
Associate Editor of BYTE
September 21, 2012

It's not surprising that lines for the latest iPhone went down the block. 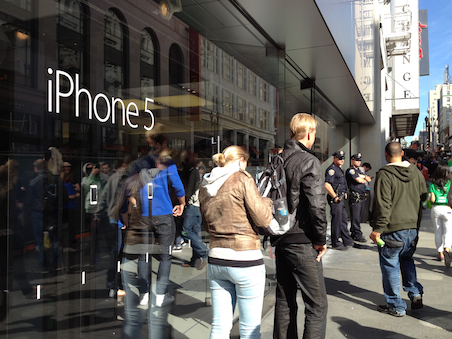 Malicious software targeting mobile devices has increased from 14,000 to 40,000 in a year, according to a new report released by the Government Accountability Office. Criminals are succeeding for myriad reasons. In addition to consumers unknowingly downloading malicious apps, many phones don't have passwords, or the two-factor authentication is misused. Operating systems are not updated, and wireless transmissions are sometimes not encrypted.

Another recent report, from RSA, said cyber criminals are less likely to write malicious code for apps in Apple's App Store because it is more regulated than Android's Google Play. According to the report, the openness of the Android app store is making "Android the most heavily-targeted mobile operating system, with Android apps by far the most widely-used vehicle for spreading mobile malware."

The BYOD trend isn't helping, either. Companies who allow employees to bring their own devices might be allowing cyber criminals to gain access to corporate communications.

One tip-off that an app is malicious, according to the RSA report, is if it requires a long list of permissions before it will install. A legitimate app usually only needs one or two permissions.

Another way criminals sneak malicious code onto a phone is by packaging their malware with legitimate apps. Consumers also should keep an eye out for apps such as SMS sniffers, said the report. These are apps that collect private SMS text messages. Another kind of malicious app, known as spyware, is used to collect personal information.

To be fair, the Android app store has several features that are helping make it more secure, said the report, such as Remote Application Removal and Google Bouncer. But as hackers do, security analysts Jon Oberheide and Charlie Miller found their way around Google Bouncer pretty easily.