Google watchers expect a new version of the 7-inch Nexus tablet to debut soon. Here's what it might look like.
Jeff Bertolucci
Contributor
March 28, 2013 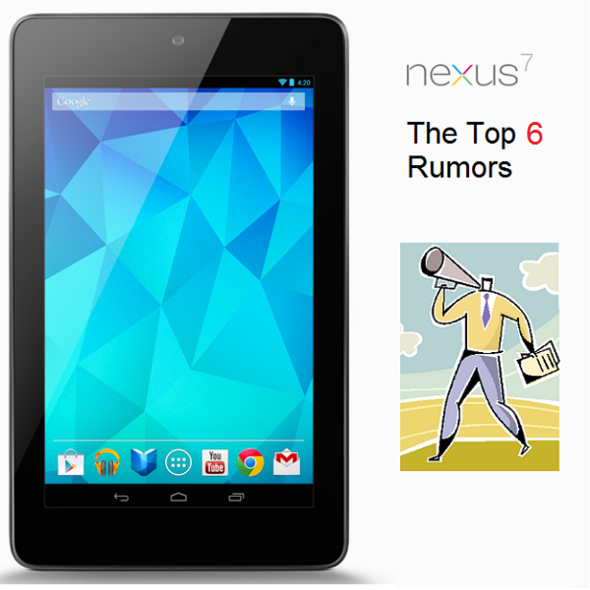 Google began shipping its Nexus 7 tablet less than a year ago, but a new model reportedly will debut within weeks, most likely at the Google I/O developer conference in May. That's according to the usual -- and increasingly accurate -- cacophony of online rumors that presage most major tech product launches. So what can we expect from the second-generation Nexus 7? Will it be a minor evolutionary upgrade, or will Google unveil something amazing?

The Nexus 7 appears to be a success for Google, which doesn't release sales figures for the device. Reports from other sources suggest the 7-inch tablet is a moderate hit. Asustek Computer, which manufacturers the Nexus 7 for Google, announced in October 2012 that sales of the 7-inch slate were approaching 1 million per month. And in February, tech industry analyst Benedict Evans estimated that global sales of the Nexus 7 probably totaled somewhere around 4.8 million. That's pretty good, but nowhere near projected sales for Apple's iPad Mini.

It might be less than a year old, but the Nexus 7 is ripe for an upgrade. It's facing growing competition in the 7- to 8-inch tablet market, including such best-sellers as the iPad Mini and Amazon Kindle Fire, as well as highly anticipated new arrivals such as the Samsung Galaxy Note 8, an 8-inch Android slate with a stylus and two cameras.

Why all the small-slate action? Consumers, it seems, prefer tiny tablets. "Key aspects are more attractive prices and the ability to hold the device in one hand rather than two," wrote NPD DisplaySearch analyst David Hsieh in a February blog post. In fact, the iPad Mini has quickly grown more popular than the larger, 9.7-inch iPad. Apple should sell about 55 million iPad Minis in 2013 -- that's roughly 20 million more than the full-size iPad, according to NPD DisplaySearch estimates.

Fierce competition from Amazon, Apple and Samsung -- not to mention newer competitors such as Acer and HP -- will force Google to maintain the Nexus 7's aggressive pricing. But can it make significant upgrades while keeping the device's $199 entry point? A teardown analysis by IHS iSuppli in July 2012 estimated the cost of building the 16-GB Nexus 7 model at $166.75, including manufacturing and materials costs. (The original 8-MB model, which Google has since discontinued, cost $159.25 to make, according to iSuppli.)

Manufacturing costs might have dropped over the past year, but rumored Nexus 7 improvements, including a higher-resolution screen, a better front-facing camera or perhaps a new rear-facing camera, and 4G LTE connectivity could make it difficult for Google to hit that $199 target. Would a pricier Nexus 7 sell? Of course, Apple has had great success with the iPad Mini, which starts at $319. Google's customers are more price sensitive, but it's conceivable that a slightly pricier Nexus 7 might find a receptive market, particularly if the second-generation model is clearly superior to small slates from Amazon, Apple and Samsung.

Dig into our slideshow to get the latest on the expected Nexus 7 upgrade.