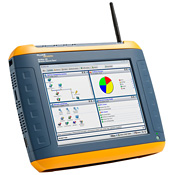 Fluke Networks' OptiView XG Network Analysis Tablet
Network engineers whose jobs require them to go on site to test networks for problems often need a host of tools at their disposal, ranging from testing and monitoring devices to different software applications for analysis and evaluation. If only there were some way to get all this functionality in one portable device.

Fluke Networks' OptiView XG is vying to be that all-in-one device, a tablet designed specifically for networking professionals. The OptiView XG comes with a full set of Fluke Networks' network analysis and testing tools pre-installed, and is configured with all of the hardware needed to monitor, test, and analyze any wired or wireless network. The OptiView XG tablet runs Windows 7 and has a 10.25-inch touch-sensitive screen.

Of course, calling this device a tablet is a little misleading; if you're imagining an iPad, think again. The OptiView XG is more of a cross between a laptop and a dedicated network-testing device. The large, heavy ruggedized device measures a chunky two inches thick and weighs 5.6 pounds. The OptiView XG is also much pricier than your typical tablet, costing from $25,000 to $30,000, depending on options and where you buy it. This makes it one of the most expensive tablets in the world. Then again, when you add up the cost of buying the separate software apps and network test devices needed approximate the functionality of the OptiView XG, it's not a bad deal.

With its responsive touch screen and familiar Windows 7 interface, the OptiView XG is easy to use. With my test unit, I was able to quickly test any kind of network, from Wi-Fi to wired networks up to 10-Gbps Ethernet. Along with all of the traditional Fluke software, the tablet also includes AirMagnet wireless monitoring software and ClearSight testing applications.

With this bundle of tools and hardware testing capabilities I could look for systems hogging network bandwidth, discover various devices on the network, and perform simple traffic tests to evaluate network performance, among other things.

And while it might not be exactly dainty, the OptiView XG proved portable enough to test on a large campus site. My device came with a nice bag including an adjustable shoulder strap for easy carrying. A built-in handle on the unit itself would have been nice to have, too. At least there is a pop-out stand on the back so you can easily prop it up on a desk or workbench.

Battery life is in the three-hour range but the OptiView XG comes with a second battery that can be hot swapped, essentially providing closer to six hours of use. The OptiView XG also includes dual 802.11N (3X3) Wi-Fi radios, an on-board spectrum analysis radio, a 10-Gbps SFP+ port, a gigabit Ethernet (10/100/1000 Mbps) port and a 100/1000 Mbps SFP+ port.

InformationWeek Analytics has published a report on backing up VM disk files and building a resilient infrastructure that can tolerate hardware and software failures. After all, what's the point of constructing a virtualized infrastructure without a plan to keep systems up and running in case of a glitch--or outright disaster? Download the report now. (Free registration required.)