HTC Claims "Best Phone Ever Made"

HTC aims high with their claims for their revamped Android smartphone. Like previous HTC phones this one is aimed at consumers with a focus on media consumption and other lifestyle features, like TV remote control. A shame it lacks microSD storage expansion.
Serdar Yegulalp
Contributor
February 19, 2013

"This is the best phone ever made," claimed U.S. president of HTC, Mike Woodward, in a presentation today in Manhattan to announce the redesigned and revamped Android-based HTC One.

Bold claims like this are nothing new for HTC; last year they rolled out the Droid DNA with the tag of "most advanced smartphone." Unlike Samsung, they're first and foremost a lifestyle-phone company; but like the Korean giant, they have been willing to explore both Windows Phone and Android offerings and see what fruit each bears in the market. The new Android-powered HTC One is all the more clearly a consumer / lifestyle product, something reflected from the outside in. 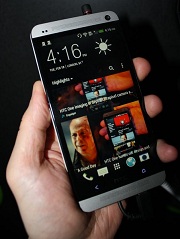 The new HTC One (click for larger image)
First, the outside. The new HTC One uses an aluminum unibody design, one with the antenna directly integrated into the metal, which reduces the number of seams and gaps across the body of the phone. The Gorilla Glass front wraps around the edges and protects a 4.7", full 1080p display (measuring 468 ppi). It all makes for a pleasant feel in the hands, both light and solid, without the oddly rubbery feel of the previous HTC phones.

The guts of the HTC One are also impressive: a Qualcomm Snapdragon 600 quad-core processor running at 1.7 GHz, with an embedded 2300 mAh battery, 2 GB of RAM and either 32 or 64 GB of internal storage, but no microSD for storage expansion. NFC, Bluetooth 4.0, DLNA wireless streaming support, a micro-USB 2.0 port capable of making HDMI connections and 802.11 a/ac/b/g/n Wi-Fi are all included.

Lifestyle features in a phone usually come down to included apps or skins. In the HTC One's case, it's reworked home screen, something HTC claims has been done to reflect the way people "snack on information" in a Twitter- and Facebook-driven media world. Called BlinkFeed, this home screen presents the user with a continuous stream of information from social network and websites that are relevant to you. The look of BlinkFeed is reminiscent of the Windows Phone 8 "tiles" system, or perhaps the Modern UI News app that ships with Windows 8. HTC hasn't waited for people to come to them to provide content for BlinkFeed. Among the 1400 providers lined up to give Blink Feed something to do is ESPN.

The introduction of Beats Audio in the HTC Rezound still seems like a gimmick, but this year HTC added some other audio-related features that seem more genuinely useful: dual front-facing speakers, for instance. Multiple microphones in the unit are alleged to optimize call quality by sampling ambient sound and adjusting the call's frequency response and volume to match. HTC calls this "HDR recording", and further claims that the HTC One can make clear-sounding recordings even in noisy environments (e.g., concerts). 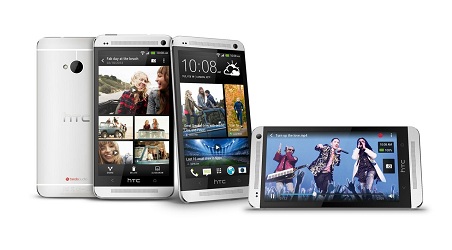 The camera, too, has been reworked, and under the banner of yet another bold declaration: "The age of megapixels is over." To wit: the fact sheet for the HTC One doesn't even list a megapixel count for the phone's camera. Instead, HTC talked about how they use a custom "Ultrapixel" sensor with larger pixels to gather more light through its f2.0/28mm lens. The end result is, so they say, better performance for both HDR still photos and full HD video. Another video-related addition to the camera, "Zoe", is an app that automatically generates edited movies from raw footage. It's reminiscent of features in desktop programs like Cyberlink PowerDirector: interesting, but only groundbreaking in that it's being offered in the phone itself instead of as an external program.

If the smartphone did away with the standalone GPS, HTC has plans to make it do away with your TV's remote as well. HTC One's "Sense TV" feature allows the phone to work as an infrared remote for set-top boxes and TV sets, letting you jump to programs on the TV via an on-phone cannel guide app. I'll be exceptionally happy if it also allows us to shut off noisy TVs in bars.

HTC plans to ship the One in March, for 80 countries via 185 mobile operators. AT&T, Sprint, T-Mobile, and Best Buy are to offer the phone in the U.S.; Rogers, Bell and Telus in Canada. No pricing has been set yet, so we'll have to wait to see how much cash has to be dropped to have the best phone ever made -- that is, so far.