Leaked images show HTC made a design change for its 2013 flagship device, codenamed the M7. It will be announced next week.
Eric Zeman
Contributor
February 15, 2013 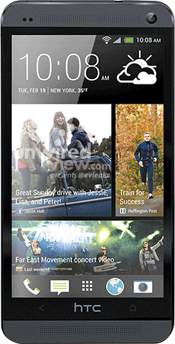 HTC One
Either HTC has the worst corporate security known to humankind, or it is intentionally showing off its brand-new smartphone on the sly before it officially introduces it to reporters next week.

HTC has invited the media to attend an event in New York City on Feb. 19. The company is expected to reveal its main smartphone for the year. The device initially bore the name "M7" -- something that CEO Peter Chou recently chanted at an internal HTC meeting. It appears as though the M7 moniker was just a codename, and HTC will call the device the HTC One.

If that name sounds a bit familiar, you're not mistaken. Throughout 2012, HTC used "One" in most of its device names, such as the One X, One S, One V and others. Why the company is simplifying the name further to just "One" is anyone's guess.

Images of the device have been spilling across the Internet for weeks. Twitter leaker extraordinaire @evleaks has supplied the best shots. The device is a stark monoblock slab with a large screen that is believed to be 1080p HD, just like the Droid DNA (sold by Verizon Wireless). The size of the display is estimated to be 4.7 inches. The pictures clearly show a user-facing camera, two speaker grills (one above and one below the display), and several sensors (probably ambient light and proximity). Images of the back side of the device have not been spotted.

[ Is your smartphone battery done before the day is over? See 5 Tips: Stretch Smartphone, Tablet Battery Life. ]

While the HTC One shown off by @evleaks is white, UnwiredView was able to get an image of a black version of the phone. The HTC One X, HTC's flagship for 2012, was offered in white and black, so it is not all that surprising to see these two shades of the HTC One.

Other details are slim. Various reports suggest that the HTC One will have a quad-core 1.7-GHz processor and come in both 32-GB and 64-GB variants. The HTC One will run Google's Android platform, either version 4.1 or 4.2 Jelly Bean. More importantly, the HTC One will use a brand-new version of HTC's Sense user interface overlay. The new UI is expected to be toned down from earlier versions.

When and where will the HTC One show up? The device will likely hit the street on March 22, and will be available from most major carriers in the U.S. Pricing is expected to run $199 for the 32-GB model and $299 for the 64-GB model.

Whatever HTC reveals on Feb. 19, it will be an important device for the Taiwan-based smartphone maker. Its fortunes have tumbled over the course of the last 18 months, despite solid devices like last year's One X. The HTC One needs to be "the one phone" that brings HTC back from the edge.