20 Top Masters Degrees For Big Data Analytics Professionals
(click image for larger view and for slideshow)
IBM celebrated National Engineers Week by welcoming science teachers and a group of Orlando high school students to the grand opening of its new THINK exhibit at Disney's Epcot theme park, which is accompanied by mobile apps and free curriculum intended to carry its lessons into the classroom.

Wednesday's event at the Epcot Innoventions pavilion was the ceremonial unveiling of an exhibit that opened in January, which is related to an earlier exhibit IBM hosted at Lincoln Center in 2011, the tech giant's centennial year. It features a gesture-controlled video wall, filled with images visitors can control as they walk past; a movie on the history of science and technology (in which big data analytics play a starring role as the wave of the future); and an array of touchscreen columns, each the size of a large refrigerator, for exploring topics in science and technology.

Lee Green, VP of brand experience and strategic design at IBM, said it can be "hard to find ways to make the IBM brand understandable," something he hopes will be addressed by an experience Epcot visitors "can touch and can engage with, because that's what people tend to remember and talk about." IBM clearly has a marketing objective in identifying itself with innovation, but it also has an interest in promoting science, technology, engineering and math education for the workforce of the future.

One theme that runs through the movie and the touchscreen displays is that there are multiple ways of exploring our world and its underlying laws: seeing, mapping, understanding, believing and acting. To turn a first impression into a lasting impression, IBM also want students and teachers to continue their exploration of these topics using the THINK app for the iPad and Android tablets, along with lessons plans from the Teachers Try Science website developed with help from the New York Hall of Science.

Danielle Miller, who teaches astronomy and physical sciences at University High School in Orlando, said she experimented with teaching the curriculum module based on the spread of the flu -- and would definitely use it if she were a biology teacher -- but also hopes to develop some astronomy curriculum of her own based on the app and share it with the Teachers Try Science community. 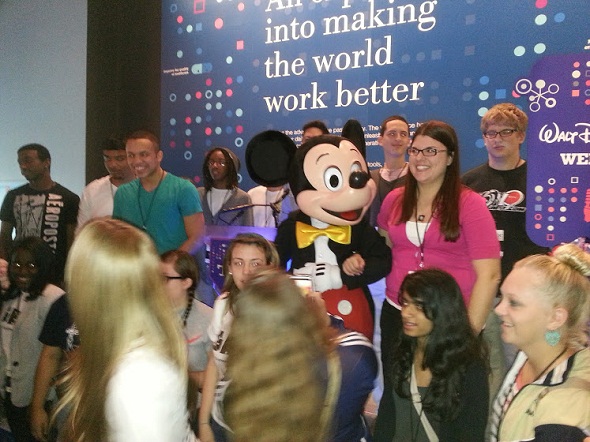 High school science teacher Danielle Miller and her students with Mickey Mouse, at the opening of the new IBM-sponsored math and science exhibit at Epcot.

Miller said she was impressed by the different ways the students she worked with reacted to the material. When she showed the mapping portion of the iPad app to members of her school's Girls in Engineering, Math and Science (GEMS) club, they immediately grasped the concept of mapping information to make better decisions and tried to apply it to "ways to make our school better." Top of their list: improving traffic patterns in the hallways and redesigning the lines in the cafeteria.

"The app allows a lot of free choice, free exploration and we know students respond to that," said Michaela Labriole, an instructor from the New York Hall of Science who worked on the THINK curriculum. Having a ready-made curriculum available is helpful to teachers who are being urged to take advantage of technologies such as tablets but may not know how to use them effectively, she said.

It's important for students to connect with STEM topics in ways that they can relate to their own lives, Labriole said.

That's certainly something Miller saw happening with this curriculum. "I already believe my students are scientists and innovators. This helps them see that, too," she said.